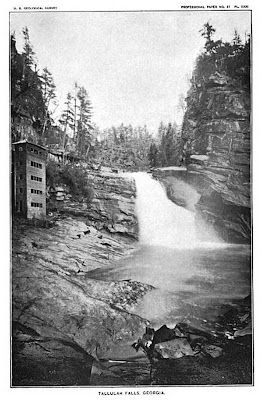 This is the photo of the week, as far as I'm concerned. A couple of years ago, I posted a story on the unusual geologic history of the Tallulah River and Gorge, a classic case of stream piracy:
http://gulahiyi.blogspot.com/2008/08/secrets-of-salamanders.html

At that time, out of curiosity, I tried to locate a photo of the Tallulah prior to the 1912 completion of the dam at the head of the gorge. I never could find one then, and just now stumbled upon the shot above from ca. 1902. 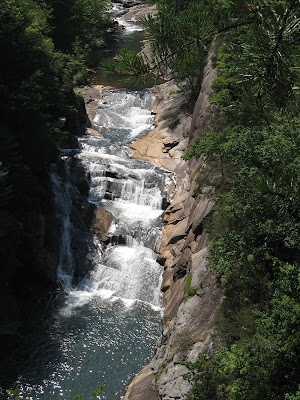 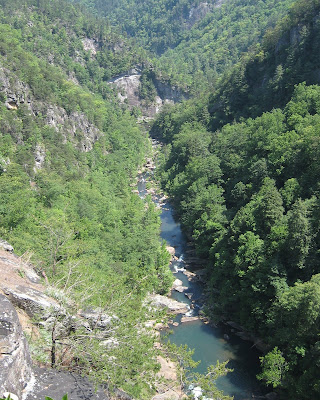 Some of the equipment used for Karl Wallenda's high wire walk across the Gorge, July 18, 1970, is still in place. And that is enough to give one pause. That's some mighty thin air as you look across the deep gorge to the other side and imagine Wallenda on the wire. 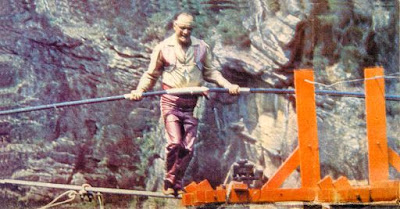 An OnlineAthens article( http://www.onlineathens.com/stories/042908/living_2008042900102.shtml ) referred to the Tallulah crossing as the greatest feat of the 65-year-old's career:

He walked 1,100 feet (the length of three football fields) across the Tallulah Gorge - some 1,000 feet above the Tallulah River (the highest a daredevil has ever performed a feat).

It took Wallenda 20 minutes to walk the slender steel cable. On the advice of his family (always in attendance) he chose the lighter of two balance poles, which weighed 45 pounds. After pausing to "talk to God," he began the walk. Halfway across, he lowered his pole to the wire and executed the first of two handstands to the deafening roar of the crowd. A few minutes later he did another handstand this time "for the boys in Vietnam."

His wife Helen met him as he descended from the cable and handed him a drink (a glass of vodka).

I did find one other pre-dam photograph of Tallulah Falls, from 1894: 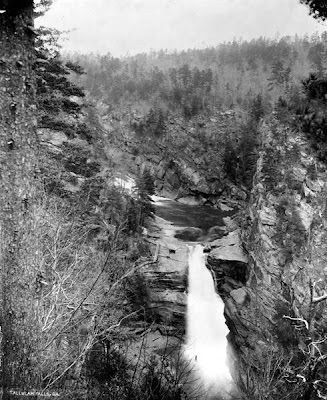 What a great place!

After Wallenda's death in 1978, Raymond Carver wrote this poem about the "daredevil" and the day he died:

That morning, 74 years old and 10 stories up,
midway between hotel and hotel, a promotional stunt
on the first day of spring, that wind
which has been everywhere with you
comes in from the Caribbean to throw itself
once and for all into your arms, like a young lover!
Your hair stands on end.
You try to crouch, to reach for the wire.
Later, men come to clean up
and take down the wire. They take down the wire
where you spent your life. Imagine that: wire.
(Poem for Karl Wallenda: Aerialist Supreme)
Posted by GULAHIYI at 12:01 AM