For the past thirty years I’ve lived within ten miles of this graceful 120-foot-tall waterfall, but I never saw it until yesterday. I’d never even heard of it until a couple of years ago, when I learned that access to the falls via land is practically impossible. Reaching the falls means a boat trip of about two-and-a-half miles, one way. 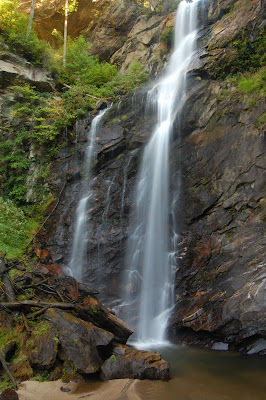 I do own a non-motorized watercraft, and count myself lucky if I get it in the water three or four times a year. However, I’ve never gone very far. When I began planning this I had no idea if five miles (or more likely, six) of flat-water paddling was within the realm of feasible for me. I was without any helpful frame of reference for how far I could go or how long it would take.

I had canoed the lake once, about twenty-five years ago, but hadn’t gone half as far as this outing would require. So, I tried for an early start, figuring the lake would be quieter, and also I would have the whole day to cover the distance if necessary.

When I started out, the weather was ideal. After a few minutes gliding along the smooth water, I was pleasantly surprised by my progress.

In about an hour, I reached the landmark that pointed to the destination. I had not been on this part of the lake before, and right away began to imagine what the undamned river must have looked like when it flowed freely here seventy-five years ago. 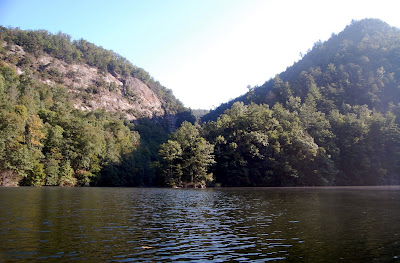 Closing in on the waterfall

I paddled as far as I could up a narrow, shady cove and could see one small waterfall just upstream from the lake. After I pulled my boat onto the shore,a narrow flat rock ledge, I saw two sinuous and sinewy figures emerge from the shadows of the waterfall rocks. In a flash, they slithered down the rocks and into the water at the base of the falls, as slippery in their movements as beads of mercury. The two swimmers, going around and around in circles and frolicking in the water were weasels (or maybe mink?), as playful as any otters I’ve seen at the nature center.

The terrain along this stream was about as rough and rocky as it comes. I followed it until I heard the roar of a larger cataract, and finally reached an open view and the gorgeous sight. It reminded me a little of Toccoa Falls in Georgia. The last time I visited that waterfall, I carried a copy of a poem composed by Stephen Greenleaf Bulfinch (1809-1870) in the 1830s. I read it aloud over the roar of Toccoa, because it seemed like the right thing to do. If I’d had a copy with me this weekend, I would have read it again to honor this waterfall, so tall and slender like Toccoa:

Through thy transparent veil,
And wide around thee, Nature's grandest forms,
Rocks, built for ages to abide the storms,
Frown on the subject dale.

Fed by thy rapid stream,
In every crevice of that savage pile,
The living herbs in quiet beauty smile,
Lit by the sunny gleam.

And over all, that gush
Of rain-drops, sparkling to the noonday sun!
While ages round thee on their course have run,
Ceaseless thy waters rush.

I would not that the bow
With gorgeous hues should light thy virgin stream;
Better thy white and sun-lit foam should gleam
Thus, like unsullied snow.

Yes! thou hast seen the woods
Around, for centuries rise, decay, and die,
While thou hast poured thy endless current by,
To join the eternal floods.

The ages pass away,
Successive nations rise, and are forgot,
But on thy brilliant course thou pausest not,
'Mid thine unchanging spray.

When I have sunk to rest—
Thus wilt thou pass in calm sublimity,
Then be thy power to others, as to me,
On the deep soul impressed.

On my way back to the lake, I reached one of the biggest poplar trees I’ve ever seen in Jackson County and a couple of doomed hemlocks almost as large. Paddling back to the landing only took about an hour. What really amazed me was meeting just three boats the entire morning. 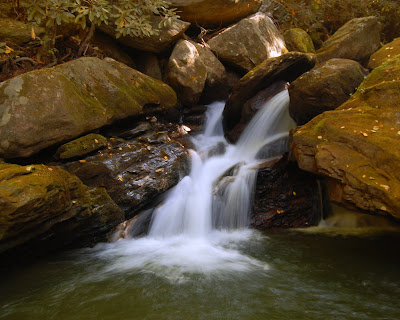 The other day, a question arose over why I titled this binge of cut-and-paste “Inhabiting Paradise.” I began thinking about “paradise” after the tour of Joe Hollis’ “paradise gardens.” Many of the implications and connotations of paradise refer to something distant in time or place. But paradise comes with perplexing choices, as real and basic in our lives as what we do to feed ourselves. Adding “inhabiting” to “paradise” is a suggestion that paradise can be relevant and immediate - present in our lives - or perhaps more precisely, we can choose to be present in paradise. Could that be a fundamental choice in any person's life? 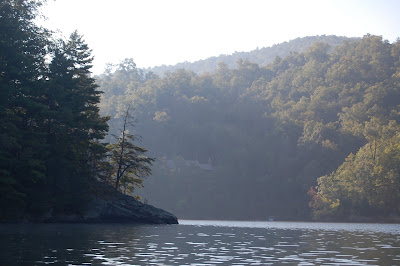 Under the entry for “paradise” in my dictionary, definition number four is “a state of delight.” And in that sense, paradise need not be far away.

Certainly, this late summer morning was one spent in paradise.

Though I haven't considered myself a Christian for many years, I will always remember seeing one of the bronze panels of the crucifixion on a door into St. Peter's--Jesus, with the two thieves, speaking "Hodie mecum eris in paradiso." It brought tears to my eyes, and I realized that if there is a paradise, it is here and now.

Jackson County up in the Mountains said...

That was beautiful depiction; I've paddled to that waterfall as well and plan to return soon, before it gets cold. The boxed in fern canyon, approached from the lake through that old-growth rhododendron, is mystical, like a hanging canyon in the redrock country, sort of. Dreaming of Sols Creek now...

James, your comment prompted me to find some photos of those panels online, and I'm glad I did.

And "Jackson," I hadn't thought of it in that way, but it was like southwestern terrain with local vegetation, which is a rather uncommon combination.

I have to admit a visceral response that included a bit of fear as I worked my way through that rhododendron thicket. Recently, I read someone who attributed a certain Appalachian gloom to dark and shadowy places like these. My map points out "The Dismal" not far from this waterfall, and I'm not sure how it got that name, but I'm guessing it might evoke some of those same emotions I felt as I started up the creek.

I'd like to try it again, especially at a time when the light would be better for some good photos. If I'd gotten there a half hour earlier, or if it had been overcast (actually, catching it during a light rain is one secret to good waterfall shots) I would have avoided some of the lighting issues, camera-wise.