"In the history of civilization, contrary to the idealistic vision of the prophet Isaiah, the plowshare has been far more destructive than the sword”
-Daniel Hillel 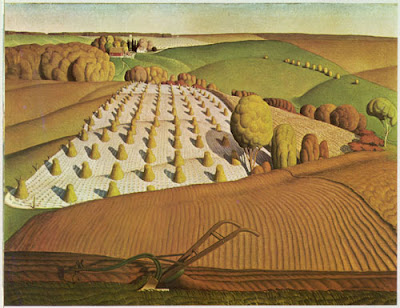 I'm rushing to conclude this series by the end of the month, but can't neglect an article which helps bring things full circle. While the current batch of blog posts has been an impromptu anthology of perspectives on paradise, a valuable article by John Feeney addresses many of the same issues, and in a more coherent manner. From Agriculture - Ending the World As We Know It:

The problem of agriculture is in part a problem of human numbers. Before farming human population size had been regulated by the same process that works for black bears, dingos, bonobos, rainbow trout, and long-tailed parakeets. It works for all species, generally keeping their numbers within carrying capacity. It’s simple: Population follows food supply. Normal oscillations in available food exert multiple small, cumulative, typically painless influences on fertility and mortality. With agriculture we circumvented this process. Growing and storing food we could go on growing our food supply. The result has been predictable: more humans. ...

Chief among the destructive impacts of agriculture are today's alarmingly elevated extinction rates. Just as agriculture has crowded out hunter-gatherers, it has pushed out other species. Most biologists agree we are today in the midst of the sixth mass extinction event in Earth's history, the fifth having eliminated the dinosaurs. This time one species -- our own -- is the cause....

How much evidence do we need to see that civilization is not the ultimate expression of human existence after all? It has been a momentary detour, the fleeting, cameo appear­ance of a dysfunctional approach to life, the result of straying from living at one with the natural world. Whatever the path to civilization’s wind-down, if we can preserve enough biodiversity, those coming out the other end will have the chance to enjoy anew a dif­ferent, yet satisfying way of living, the only way proven sustainable for humans. Racing toward a precipice, can it be wrong to embrace once again a life which worked for over two million years when it has become obvious the current approach is an abject failure? We don’t have to go backwards; we need only nurture who we really are. Whatever our course, we have only to consider the agricultural origins of our ecological crisis to under­stand civilization is an unsustainable trap.

Through John Feeney, I also learned about Urban Scout, author of Rewild or Die. 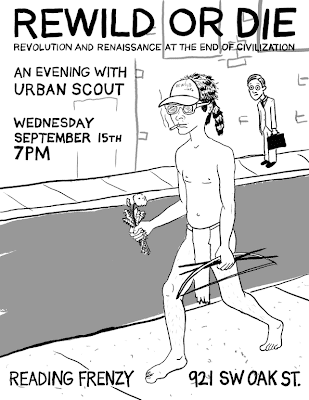 His blog, The Adventures of Urban Scout, A Hunter-Gatherer Wannabe, puts some fun back in proFUNDdity, which is always a refreshing accomplishment.

Inevitably those-who-rewild will find themselves attacked as hypocrites by those who don’t understand rewilding: “If you hate civilization so much, why don’t you go live in the woods?” “You hate technology, but there you sit waiting for people to comment on your latest facebook status update.” “You want to live like a hunter-gatherer but you buy all your food at the grocery store!” “You talk shit on mainstream media, but you watch television!” And on, and on and on. ...

Urban's essay, On Killing Animals, Insects and Plants, concerns his recent experience of slaughtering rabbits for the first time:

The emotional intensity of killing feels impossible to describe. I didn’t cry. Instead my adrenaline rushed so fast I thought I might throw up or faint. I had to focus on breathing. The adrenaline really kicks in when you see the rabbit squirm a bit and think, “Oh right. The rabbit will struggle for its life.” Most urban people forget this. Most urban people have never seen it happen. Most urban people have never done it themselves. Vegans have a point in this regard: you can’t hear a plant scream, it can’t run or squirm. It makes killing plants very easy and it makes killing animals much more difficult, both emotionally and physically...

I muse and read occasionally about the unlocking of human fecundity from the low levels that were seen in the last hunter-gatherers. I mostly center on the Scandinavians because of the cultural/historical consequences of their population blastoff.