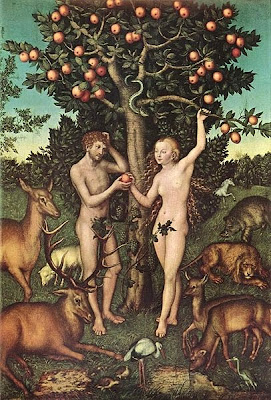 Adam and Eve in the Garden of Eden was made in 1526, when Cranach was at the height of his powers. It is arguably one of the most beautiful and innovative of over 50 depictions of Adam and Eve produced in Cranach's workshop. The traditional static manner of representing the scene--with the serpent offering the apple to Eve standing on one side of the Tree of Knowledge, with Adam on the other--is abandoned in favour of a sunny woodland scene more suggestive of the Garden of Eden. The serpent, which usually plays a more dominant role, is coiled up dozing in an apple-tree laden with ripe fruit. Light falls seductively on Eve's body and hair and Adam scratches his head doubtfully while taking a half-eaten apple from her hand. The couple are surrounded by a variety of animals and birds that imbue the scene with an air of rural contentment.

.
This is the moment Cranach illuminates, the climax of Eve having tasted and handing the fruit to Adam. Eve looks so knowing, appearing like the cat that swallowed the bird, and now looks downright crafty herself. Adam, however, isn’t in the know yet, so he scratches his head stupidly with his left hand, the exact opposite of Eve. The painterly complementarity is heightened by their skin tones, with earthy Adam the color of soil as his name implies in Hebrew (אדמ ’adam “man” and אדמה ’adamah “ground”) and Eve the hue of palest marble, as in Egyptian and even Greek art. With her left arm bending down the branch, she passes the fruit with her right hand to puzzled Adam who reaches for it, vacantly not looking exactly at Eve, or perhaps equally at the forbidden fruit, whereas Eve now looks slyly and directly at him.
...

The animals in Cranach's painting are not mentioned in the biblical text other than as beasts previously named by Adam, but none are found in this passage by name, so other reasons for his including them are merely speculative. Medieval bestiaries derived from the Classical Physiologus often suggested moral lessons associated with certain animals. The majority of animals in Cranach’s foreground around Adam and Eve are artiodactyls or similar mammals, horned beasts like the stag and its mate and a pair of male and female gazelles, in direct symmetry with Adam and Eve. These particular beasts and stags in particular are also often allegorically symbolic of lust, rampant desire and concupiscence in medieval bestiaries. The boar, also present here behind Eve, often corresponds with gluttony or desire for food (“she saw the fruit was good for food and pleasing to the eyes” Gen. 3:6), and the sheep behind Adam can often be emblematic for docility or even stupidity (he is ignorant until tasting the fruit).

-from "Lucas Cranach the Elder's Adam and Eve of 1526: Text, Iconography and Hermeneutics," by Patrick Hunt, on Philolog
http://traumwerk.stanford.edu/philolog/2009/09/lucas_cranach_the_elder_adam.html
Posted by GULAHIYI at 5:01 PM