A Troubadour Tramps Through the Mountains - 11

I wonder about the identity of the family that hosted Vachel Lindsay after he left Highlands and reached Jackson County in the spring of 1906. Who knows? Maybe the incident remains alive as a small piece of family lore for some local family, the memory of a story told about the night that an eccentric young man appeared, needing a place to stay, and going on to write about it years later. And then again, maybe not. 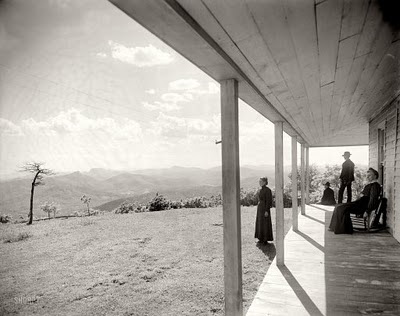 From A Handy Guide for Beggars, by Vachel Lindsay:

Musing these matters, I munched my gingerbread, walking past sweet waterfalls, groves of enormous cedars, many springs, and one deserted cabin. I was homesick for that great civilized camp, New York, and the soberminded pursuit of knowledge there.

But civilization lost her battle at twilight, when I swallowed my last gingerbread crumb. Immediately I was in the land beyond the nowhere place, willing to sleep twelve hours by a waterfall, or let the fairies wake me before day. The road went deeper into savagery. I blundered on, rejoicing in the fever of weariness. In the piercing light of the young stars, the house that came at last before me seemed even more deeply rooted in the ground than the oaks around it. What new revelation lies here? Knock, knock, knock, O my soul, and may Heaven open a mystery that will give the traveller a contrite heart.

Let us tell a secret, even before we enter. If, with the proper magic in our minds, we were guests here, a year or a day, we might write the world's one unwritten epic. All day, in one of these tiny rooms, amid appointments that fill the spirit with the elation of simple things, we would write. At evening we would dream the next event by the fire. The epic would begin with the opening of the door.

There appeared a military figure, with a face like Henry Irving's in contour, like Whistler's in sharpness, fantasy, and pride.

"May I have a night's lodging? I have no money."

We were inside. He asked: "What might be your name?" I gave it. He gave his. The circle by the fire did not turn their heads, but presumably I was introduced. One child ran into the kitchen. My host gave me her chair. All looked silently into the great soapkettle in the midst of the snapping logs.

I have a high opinion of the fine people of the South, and gratefully remember the scattering of gentlefolk so good as to entertain me in their mansions. But in this cottage, with one glance at those fixed, flushed faces, I said: "This is the best blood I have met in this United States." The five children were nightblooming flowers. There were hints of Dore in the shadow of the father, cast against the log walls of the cabin. He sat on the little stairway. He was a better Don Quixote than Dore ever drew. 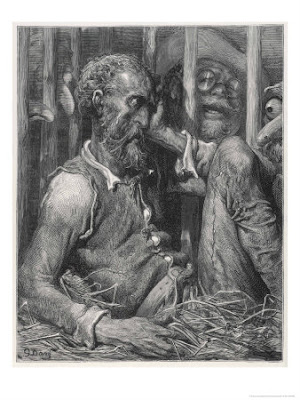 I said, "Every middle-aged man I have met in Florida, Georgia, and North Carolina has been a soldier, and I suppose you were."

He looked at me long, as though the obligation of hospitality did not involve conversation. He spoke at last:
"I fought, but I could not help it. It was for home, or against home. I fought for this cabin."

"It is a beautiful cabin."

He relented a bit. "We have kept it just so, ever since my great-grandfather came here with his pack-mule and made his own trail. I — I hated the war. We did not care anything about the cotton and niggers of the fire-eaters. The niggers never climbed this high."

I changed the subject. "This is the largest fireplace I have seen in the South. A man could stand up in it."

He stiffened again. "This is not the South. This is the Blue Ridge."

An inner door opened. It was plain the woman who stood there was his wife. She had the austere mouth a wife's passion gives. She had the sweet white throat of her youth, that made even the candle-flame rejoice.

She looked straight at me, with inkblack eyes. She was dumb, like some one struggling to awake.

"Everything is ready," she said at length to her husband.

He turned to me: " Your supper is now in the kitchen, 'if what we have is good enough.'" It was the usual formula for hospitality.

I turned to the wife. "My dear woman, I did not know that this was going on. It is not right for you to set a new supper at this hour. I had enough on the road."

"But you have walked a long way." Then she uttered the ancient proverb of the Blue Ridge. "'A stranger needs takin' care of.'"

In the kitchen there was a cook-stove. Otherwise there was nothing to remind one of the world this side of Beowulf. I felt myself in a stronghold of barbarian royalty.

"Do you do your own spinning and weaving?"

She lifted the candle, lighting a corner. "Here are the cards and the wools." She held it higher. "There is the spinning wheel."

"Where is the loom?"

"Up stairs, just by where you will sleep."

I knew that if there was a loom, it was a magic one, for she was a witch of the better sort, a fine, serious witch, and a princess withal. Her ancestors wore their black hair that simple way when their lords won them by fighting dragons. She was prouder than the pyramids. If the epic is ever written, let it tell how the spinner of the wizard wools did stand to serve the stranger, that being the custom of her house. 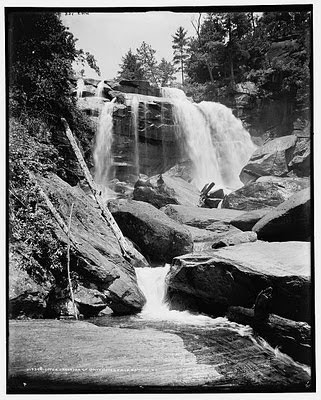 This was a primitive camp indeed. There was no gingerbread. There was not one thing to remind me of the last table at which I had eaten. But every gesture said, "Good prince, you are far from your court. Therefore, this, our royal trencher, is yours. May you find your way to your own kingdom in peace."

But for a long time her lips were still. She had the spareness of a fertile, toiling mother. And, ah, the motherhood in her voice when she said at last, "My son, you are tired."

I absolutely love this line.

He stiffened again. "This is not the South. This is the Blue Ridge."