A Troubadour Tramps Through the Mountains - 2

“Sing for your supper.”

Essentially, that was Vachel Lindsay’s strategy for his long-distance walk through the Southeast in the spring of 1906. He would recite his poems and draw his pictures in exchange for a meal and a bed. 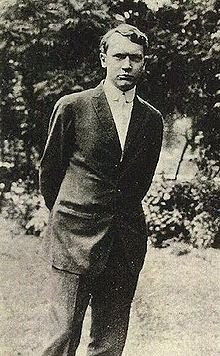 Demonstrating his resolve, he began his hike in Florida by spending his last nickel on a bag of peanuts. His avowed mission was "sharing the lives of and bringing hope to the common people in the depths.”

Somehow, Lindsay managed to get by. In Atlanta, he pocketed some cash from giving lectures and reading poems. He also enjoyed the hospitality of the local Salvation Army, which might have inspired his best-known poem, General William Booth Enters into Heaven.

I’ve had to remind myself that the people of 1906 couldn’t switch on a radio or television. They weren’t clicking mice. So, folks starved for entertainment might welcome an itinerant troubadour.

Despite his relative financial success in Atlanta, Lindsay's income in the mountains was nil. He didn’t even try to draw an audience in Highlands after he saw that it was a quiet summer resort town for wealthy northerners.

Edgar Lee Masters tells how the poet misjudged one audience in Tennessee:

In the hills he attended a Hardshell Baptist church, and stayed with some pious, rough people. He started to read “The Tree of the Laughing Bells” to them. In the midst of the performance the young woman and the old woman left the room unceremoniously. They returned and Lindsay, not sufficiently persuaded that they did not want to hear the poem, but that they should be converted willy-nilly to beauty, prevailed upon them to listen again.

The old lady grew angry now, and told Lindsay that she no use for such lies. She wanted something with the gospel of Jesus Christ in it, the Old Book was enough for her. The result was that she would not accept the poem as pay for his entertainment, and Lindsay was compelled to leave owing for it….

The fledgling poet counted on one work in particular to be his meal ticket and that was The Tree of the Laughing Bells. I have to remind myself that Lindsay’s energetic vocal stylings enlivened what otherwise might have been interminably tedious…but you be the judge:

The Tree of Laughing Bells, or The Wings of the Morning
[A Poem for Aviators]

How the Wings Were Made

From many morning-glories
That in an hour will fade,
From many pansy buds
Gathered in the shade,
From lily of the valley
And dandelion buds,
From fiery poppy-buds
Are the Wings of the Morning made. 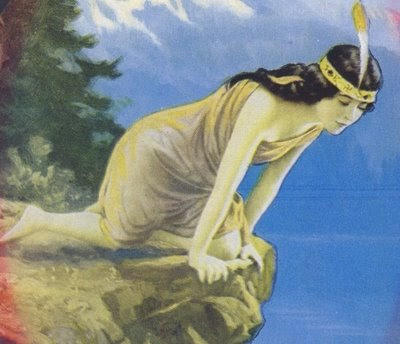 The Indian Girl Who Made Them

These, the Wings of the Morning,
An Indian Maiden wove,
Intertwining subtilely
Wands from a willow grove
Beside the Sangamon --
Rude stream of Dreamland Town.
She bound them to my shoulders
With fingers golden-brown.
The wings were part of me;
The willow-wands were hot.
Pulses from my heart
Healed each bruise and spot
Of the morning-glory buds,
Beginning to unfold
Beneath her burning song of suns untold.
...

Haven’t we met her before? 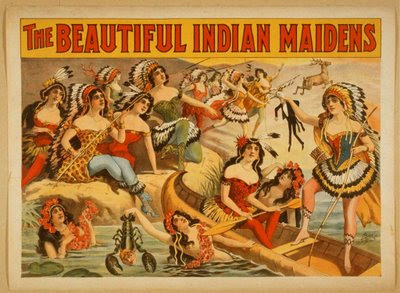 I panted in the grassy wood;
I kissed the Indian Maid
As she took my wings from me:
With all the grace I could
I gave two throbbing bells to her
From the foot of the Laughing Tree.
And one she pressed to her golden breast
And one, gave back to me.
From Lilies of the valley --
See them fade.
From poppy-blooms all frayed,
From dandelions gray with care,
From pansy-faces, worn and torn,
From morning-glories --
See them fade --
From all things fragile, faint and fair
Are the Wings of the Morning made!

Later, in a letter to a friend, Vachel Lindsay recounted the 1906 hike:

I had had very little response anywhere and very little understanding. No one cared for my pictures, no one cared for my verse, and I turned beggar in sheer desperation. Many people try to gloss this over now and make out it was a merry little spring excursion and I didn't really mean it. They are dead wrong. It was a life and death struggle, nothing less. I was entirely prepared to die for my work, if necessary, by the side of the road, and was almost at the point of it at times. . . . [My parents] were certainly at this time intensely hostile to everything I did, said, wrote, thought, or drew. Things were in a state where it was infinitely easier to beg from door to door than to go home, or even die by the ditch on the highway.

I will never forget the easy, dreaming Kentucky and the droning bees in the blue grass, and the walks with Cousin Eudora and Aunt Eudora, and the queer feeling of being the family disgrace somewhat straightened out when I stood up to read 'The Tree of Laughing Bells' to the school. As far as I know, I read it in my beggar's raiment. I am sure I felt that way, and it was the kind hearts around me in that particular spot that made me want to live.
.
Posted by GULAHIYI at 12:01 AM

I, of course, read this account differently than others are likely to do - quite differently from recognizing his arcane desire, his foolishness (he did likely almost starve to death along the way) - other than just recognizing that he was a ridiculous idealist, living by the coordinates of values so completely out of sync with his contemporary world.

I’m an artist, and so recognize he was on a quest, the quest that every real artist must embark on. At its source this quest is much older than the European troubadour tradition. It’s as old as that of Orpheus , or of every shaman in any culture - of any creative life lived honestly and with respect to its sacred source. It’s the archetypal story of any one who at supper pushes her dinner plate away, gets up, walks out of the house, turns and follows toward the east something that has been lost or forgotten. It happens all the time. We all have our hungry hearts. It’s just that some of us have to get up from the dinner table and go find what it yearns for.

Vachel’s project is ridiculous in a consumer dependent culture, but only so because that culture is so ridiculous. But he was responding to something much older and much deeper in our human culture - the gift economy. For more on that look into Lewis Hyde’s book 'The Gift'

That says it beautifully. Thank you.

Lewis Hyde I will need to read.

I am more and more impressed with what Vachel actually did. He need not be forgotten.