A Troubadour Tramps Through the Mountains - 17

I came along several years too late to know my great-grandfather. He lived among fellow descendents of German immigrants whose neatly-kept farms added beauty to the rolling hills of the Southern Piedmont. He worked as a miller until the day the gypsies came. 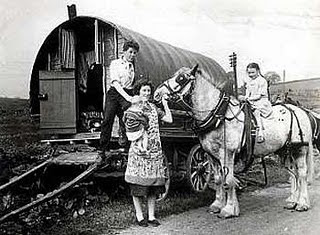 They robbed him, beat him, and left him for dead by the millrace. Somehow, he survived the attack, but he never fully recovered. To be precise, the "gypsies" were likely “Irish Travelers” from a group that had settled in the South fifty years earlier. They would fan out across the countryside every spring, trading horses and mules and finding other, often questionable, ways to make a living.

In May of 1906, after he had crossed the mountains from North Carolina into Tennessee, Vachel Lindsay crossed paths with gypsies, but his meeting had a more satisfactory outcome. 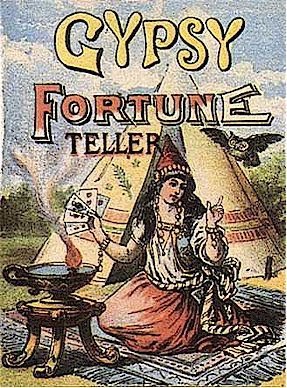 According to his biographer Edgar Lee Masters, Lindsay neared Greenville, Tennesee and was received into a store in the midst of wheat fields where he spent the night:

Across the way from the store was a camp of gypsies, “Who live better and cleaner than any people since Asheville.” The gypsies asked many questions and told him that he was entering the land of hospitality. Along the way now through the valleys were numerous snakes; but there were many rose bushes in luxuriant bloom in the pretty yards of the farmers. 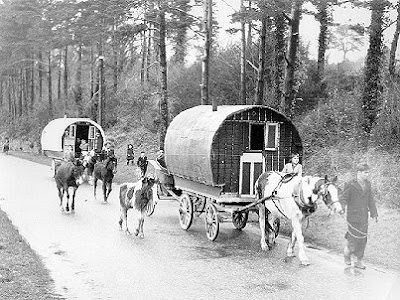 Though he declined an offer to join the gypsies, the encounter inspired Lindsay to compose a bit of verse:

THE TRAMP'S REFUSAL
On Being Asked by a Beautiful Gipsy
to Join her Group of Strolling Players.

Lady, I cannot act, though I admire
God's great chameleons, Booth-Barret men.
But when the trees are green, my thoughts may be
October-red. December comes again
And snowy Christmas there within my breast
Though I be walking in the August dust.


Often my lone contrary sword is bright
When every other soldier's sword is rust.
Sometimes, while churchly friends go up to God
On wings of prayer to altars of delight
I walk and talk with Satan, call him friend,
And greet the imps with converse most polite.


When hunger nips me, then at once I knock
At the near farmer's door and ask for bread.
I must, when I have wrought a curious song
Pin down some stranger till the thing is read.
When weeds choke up within, then look to me
To show the world the manners of a weed.


I cannot change my cloak except my heart
Has changed and set the fashion for the deed.
When love betrays me I go forth to tell
The first kind gossip that too-patent fact.
I cannot pose at hunger, love or shame.
It plagues me not to say: "I cannot act."


I only mourn that this unharnessed me
Walks with the devil far too much each day.
I would be chained to angel-kings of fire.
And whipped and driven up the heavenly way.