Along the Divide - Lilburn

If I could write the books I’d want to write, one would be a collection of stories from along the Eastern Continental Divide. Things are especially interesting on the margins, on the edges, along the borders, and that’s certainly the case for the ECD. Of course, I’ve already posted a bunch of entries related to the natural and human history occurring along the divide in western North Carolina, but that just scratches the surface. 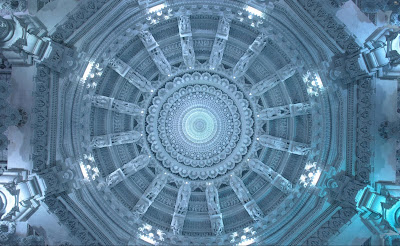 Only after a recent trip to Atlanta did I learn that the ECD runs right through that metropolis. This is not entirely coincidental. Atlanta is Atlanta because it was a railroad town. And it was a railroad town, in part, because railways routed along the divide offer the advantage of dodging larger rivers that require long and expensive bridge trestles.

This may have been the case, as well, for early roads. Depending on the route chosen from Rabun Gap to Atlanta, you might cross the divide nine times or more. In metro Atlanta, you don't travel far from the divide to find Lilburn, Georgia and the largest Hindu temple outside of India. 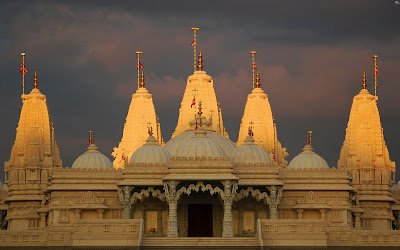 The BAPS Shri Swaminarayan Sanstha opened on August 26, 2007. From a news release and from the BAPS website:

The temple follows similar ones consecrated in Houston, Chicago, and most recently, Toronto.

The pillars of the majestic white structure are intricately hand-carved and each has a story to tell -- taken from ancient Hindu scriptures. As a regular volunteer for over two years, engineer Manish Patel explains that "the Mandir, apart from being a socio-spiritual haven, brings true Indian architecture and culture to life on American grounds. This has truly been a community effort."

It is built according to guidelines dictated in the ancient Shilp-Shastras and there is an inside and outside parikrama , areas in which visitors can circumbulate around the images. It has a tapered ceiling. The structure is built with three types of stones. These stones were hand-carved and shipped from India to be assembled.

The ornate structure is estimated to last for at least a thousand years due to the lack of any reinforcing steel or other metals in its construction. The massive building will avoid traditional elements of decay because it is carved from Turkish limestone, Italian Carrara marble, and Indian sandstone. The building includes 34,000 carved pieces including 391 pillars, 116 archways, and 86 decorative ceilings. About 900 volunteers donated 1.3 million hours of construction to erect the edifice. Seventeen months were required of 1,500 craftsmen at 26 sites in India to complete the stonework. 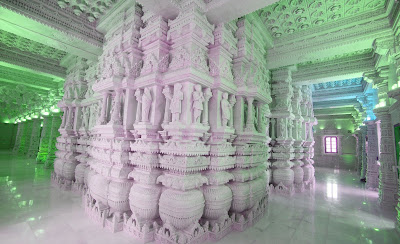 A 2007 article by a Georgia Baptist group examined the impact of globalization on Atlanta’s houses of worship. In 1980, Baptist churches within the I-285 perimeter claimed membership by 12% of that area’s population. By 2007, Baptist membership had dropped to 4% of the population. Meanwhile, the ever-increasing population of Atlanta had resulted in many non-Christian churches:

A Georgia Baptist Convention staffer has completed a project involving careful and meticulous research concluding that there are 79 Muslim mosques, six Bahai’i worship centers, and 29 Muslim cultural and learning centers in the Atlanta metro area. The same research reveals that there are 52 Hindu temples presently operational or under construction in the greater Atlanta area.

Since photography at the temple is prohibited, the photos for this entry are from the BAPS website.
.
Posted by GULAHIYI at 12:01 AM