For the arrival of the winter solstice on Tuesday here's a re-run from last year: 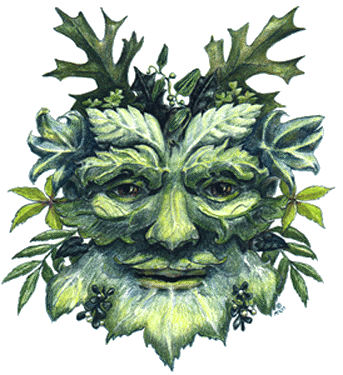 The Green Man, born on the winter solstice

Over the centuries, many cultures of the northern hemisphere have celebrated this day. One recurring theme is to make it a time of ritual purification. What a novel concept! I don’t think we’d have much luck pitching “purification” to the contemporary American consumer of holidays. But I like it, and so I’ll give some thought to how I might make myself more pure.

Another common thread is the idea of “light overcoming darkness.” At first, this seems a counterintuitive way to look at the shortest day of the year. On second thought, it does fit since each day will now be getting longer.

Japanese sun goddess Amaterasu emerges from her seclusion in a cave

Obviously, the remnant that still thinks of Christmas as something other than a binge of orgiastic materialism could relate to the themes of light overcoming darkness and the birthday of the sun (Son). However, they might find the parallels to pagan traditions too close for comfort. So let’s move on.

I enjoyed learning about the indigenous people of Finland, the Saami, who worshipped the sun-goddess Beiwe:

She travels with her daughter, Beiwe-Neia, through the sky in an enclosure of reindeer bones, bringing back the green plants for the reindeer to feed upon. On the Winter Solstice, her worshippers sacrifice white female animals and thread the meat on sticks which they bent into rings and tied with bright ribbons. They also smear their doorposts with butter so Beiwe can eat the rich food and begin her recovery.
(From Waverly Fitzgerald’s School of the Seasons)
http://www.schooloftheseasons.com/decdays2.html#solstice

In east Asia, the winter solstice observance has gone by many names, including the Dōngzhì Festival of China. The origins of this festival can be traced to the yin and yang philosophy of balance and harmony in the cosmos. After this celebration, there will be days with longer daylight hours and therefore an increase in positive energy flowing in. The philosophical significance of this is symbolized by the I Ching hexagram fù (復, "Returning"). The Asian observances involve quite a few food customs, and that scores points in my book.

Karachun was celebrated by Slavs on the longest night of the year. Hors, symbolising the old sun, becomes smaller as the days become shorter, and dies on the solstice, defeated by the dark and evil powers of the Black God. To honor Hors, the Slavs danced a ritual chain-dance. Traditional chain-dancing in Bulgaria is still called horo. On the day after the solstice, Hors is resurrected and becomes the new sun, Koleda. On this day, the Slavs burned fires at cemeteries to keep their departed loved ones warm, organized meals in the honor of the dead so as they would not suffer from hunger and lit wooden logs at local crossroads.

Based on what I know of my own German heritage, I figured they probably got it right. And they did, according to one description that I read:

Early Germans (c.500–1000) considered the Norse goddess, Hertha or Bertha to be the goddess of light, domesticity and the home. They baked yeast cakes shaped like shoes, which were called Hertha's slippers, and filled with gifts. "During the Winter Solstice houses were decked with fir and evergreens to welcome her coming. When the family and serfs were gathered to dine, a great altar of flat stones was erected and here a fire of fir boughs was laid. Hertha descended through the smoke, guiding those who were wise in saga lore to foretell the fortunes of those persons at the feast".

The fact is, you could borrow from ancient cultures to craft a different winter solstice observance every year, and have plenty to last a lifetime. Which sounds like a lot more fun than the same old same old.

To Juan at the Winter Solstice
-by Robert Graves

There is one story and one story only
That will prove worth your telling,
Whether as learned bard or gifted child;
To it all lines or lesser gauds belong
That startle with their shining
Such common stories as they stray into.

Is it of trees you tell, their months and virtues,
Or strange beasts that beset you,
Of birds that croak at you the Triple will?
Or of the Zodiac and how slow it turns
Below the Boreal Crown,
Prison to all true kings that ever reigned?

Water to water, ark again to ark,
From woman back to woman:
So each new victim treads unfalteringly
The never altered circuit of his fate,
Bringing twelve peers as witness
Both to his starry rise and starry fall.

Or is it of the Virgin's silver beauty,
All fish below the thighs?
She in her left hand bears a leafy quince;
When, with her right hand she crooks a finger, smiling,
How many the King hold back?
Royally then he barters life for love.

Or of the undying snake from chaos hatched,
Whose coils contain the ocean,
Into whose chops with naked sword he springs,
Then in black water, tangled by the reeds,
Battles three days and nights,
To be spewed up beside her scalloped shore?

Much snow if falling, winds roar hollowly,
The owl hoots from the elder,
Fear in your heart cries to the loving-cup:
Sorrow to sorrow as the sparks fly upward.
The log groans and confesses:
There is one story and one story only.

Dwell on her graciousness, dwell on her smiling,
Do not forget what flowers
The great boar trampled down in ivy time.
Her brow was creamy as the crested wave,
Her sea-blue eyes were wild
But nothing promised that is not performed.
.
Posted by GULAHIYI at 7:01 PM