Languages evolve over the course of centuries to meet the needs of their speakers and to convey the thoughts these speakers choose to express. Each language shows us a unique way of understanding experience; the loss of a language means the loss of all that could be learned through the study of that language about human values, oral literature and tradition, history, and human thought.
-Dr. Lyle Campbell, University of Canterbury 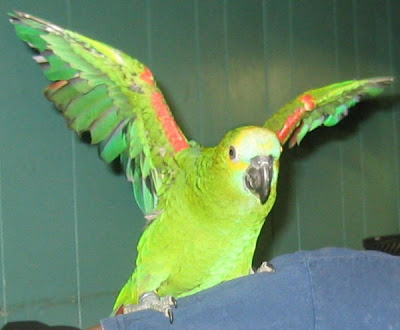 According to some estimates, at the time of European contact the Western Hemisphere was occupied by 40 million people speaking 1,800 different languages. Perhaps 300 languages were spoken in North America.

There are some 6,000 languages in the world at the moment. And of these, about half – some say more, come say less – are going to die out in the course of the next century. The relevant deduction is sobering: 3,000 languages in 1200 months. That means, on average, there is a language dying out somewhere in the world every two weeks or so.

Crystal points to natural disasters, cultural assimilation and genocide as reasons for language extinction. Perhaps it is not too much of a stretch to draw parallels to the current unprecedented rate of extinction for biological species.

In his book, Crystal retells an amazing story:

The explorer Alexander von Humboldt was searching for the source of the Orinoco, in South America, in 1801. He met some Carib Indians who had recently exterminated a neighbouring tribe and captured some of their domesticated parrots. The parrots still spoke words of the now extinct language, and von Humboldt was able to transcribe some of them.

Inspired by this story, Rachel Berwick, a conceptual artist at Yale, designed a special enclosure in which to display two Amazon parrots trained to speak some words from that lost langauge.

In an online story, Sue Farlow recounts her experience of training the parrots for Berwick’s art installation. Farlow worked from a list of about 40 words that von Humboldt had recorded.

OK. I think the von Humboldt encounter with the Orinoco parrots is a great story, and as concepts go, good fodder for a conceptual artist like Berwick.

At this point, I should acknowledge that Crystal prefaced his account of the von Humboldt legend with the disclaimer that it was "probably aprocryphal." One curious blogger who goes by the name "Dr Beachcombing" explored the matter further and I would recommend his story to anyone who remains curious about the veracity of the von Humboldt legend. Dr Beachcombing gets to "the rest of the story."

I would just add that Dr. Beachcombing has one of the most interesting blogs I've stumbled across in a long time - http://beachcombing.wordpress.com/about/
Posted by GULAHIYI at 12:01 AM

"Sun, moon, mountains and rivers are the writing of being, the literature of what-is. Long before our species was born, the books had been written. The library was here before we were. We live in it. We can add to it, or we can try; we can also subtract from it. We can chop it down, incinerate it, strip mine it, poison it, bury it under our trash. But we didn't create it, and if we destroy it, we cannot replace it. Literature, culture, pattern aren't man-made. The culture of the Tao is not man-made, and the culture of humans is not man-made; it is just the human part of the culture of the whole.
When you think intensely and beautifully, something happens. That something is called poetry. If you think that way and speak at the same time, poetry gets in your mouth. If people hear you, it gets in their ears. If you think that way and write at the same time, then poetry gets written. But poetry exists in any case. The question is only: are you going to take part, and if so, how?" -Robert Bringhurst, "Poetry and Thinking," in his The Tree of Meaning: Language, Mind and Ecology (2006),p. 143

Thanks for that! It sounds like an interesting book. I'll have to track that one down.