At the end of the nineteenth century, ornithologists studied birds in the way they had studied them since the time of John J. Audubon: they took their shotguns and slaughtered them. 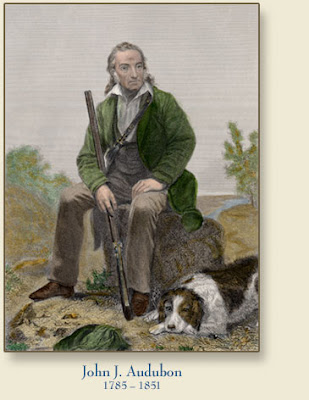 In his history of American birding, Of a Feather, Scott Weidensaul uses the term “Shotgun Ornithology” to refer to the firmly held belief of that time: “the path to ornithological wisdom issued from the muzzle of a shotgun.” The idea was to collect all the skins you could, fifty or a hundred of any given species. For Audubon himself, the shotgun was as indispensable as the paint brush.

I find it a tad ironic that the Audubon Society is named after such a gunslinger. But fortunately, times change. On Christmas Day 1900, Frank Chapman took a different approach. He began a tradition of counting the birds instead of hunting them. His idea caught on and, now, birders throughout the western hemisphere get out on Christmas (or sometime thereabouts) to watch and listen and count. I wonder if any other organized volunteer effort has collected as much scientific data as has the Christmas Bird Count, just completing its 111th cycle.

The Audubon Society has a wealth of information on how the CBC has helped birds and our understanding of their lives: http://birds.audubon.org/how-christmas-bird-count-helps-birds

Now, I’m not a bird expert. Far from it. I did go out with the birders a few times, because I was curious to observe them observing the birds, to see how it might be possible to encounter 40 or 50 different species of birds in one morning. Perhaps I encounter that many different species of birds when I go out, but I’m lucky to identify a small fraction of them. Before the last big snow, I put out the feeder again, stocked with black oil sunflower seeds. As in previous years, at least 90% of the visitors are chickadees, titmice and nuthatches.

I enjoy watching all of them come around, but the rare visits from other birds are always special. Several years ago, I wrote about one of those exceptional visitors, the Rose-breasted Grosbeak: http://gulahiyi.blogspot.com/2008/05/dignified-visitor.html

On the morning of New Year's Day, while I was still half-asleep, I stepped onto the deck and glanced at the feeder. Normally, birds will scatter as soon as I open the door, but this individual stayed on the perch and gave me a look as if to say, “What the heck do you want?” 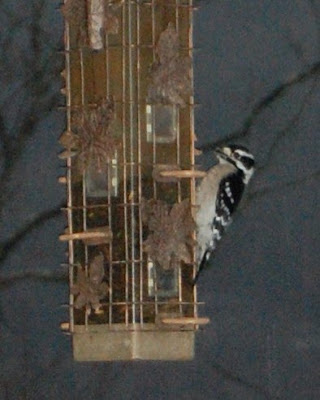 “I want to take your picture,” was the thought that came to mind. And the bird stayed there while I went to retrieve a camera. It stayed there when I came back outside, and I managed a so-so shot (above). I really didn’t know what kind of bird I had just seen, but as it returned that morning, I took careful note of its markings. Later, looking it up in my bird book, I figured out that it was a Downy Woodpecker. I might have guessed it was some type of woodpecker, except it had no red markings at all. However, that identifies it as a female Downy.

Anyhow, local birders have been out conducting the Christmas Bird Count in our neck of the woods. One group scoured the Highlands area on December 17, 2010 and tallied 37 species, with the Carolina Chickadee and the Dark-eyed (Slate-colored) Junco being the most numerous. Here’s their list:

There was also a Balsam area CBC on January 1, 2011. The inhospitable weather made for a relatively low count, by Balsam standards, but it was a larger group and their territory included the bird haven of Lake Junaluska. Their species count was 65, with the most numerous birds being American Coots and European Starlings:

For detailed tables on these and other bird counts: http://cbc.audubon.org/cbccurrent/current_table.html

When a dead tree falls, the woodpeckers share in its death.
-Malayan proverb

Even the woodpecker owes his success to the fact that he uses his head and keeps pecking away until he finishes the job he starts.
-Coleman Cox

My father told me all about the birds and the bees, the liar - I went steady with a woodpecker till I was twenty-one.
-Bob Hope

It is timely that you speak of birds. Two weeks ago hundreds of birds filled the trees near my home and stayed a week. Just the other day so many fell from the sky while millions of fish died in the Chesapeake Bay.

A friend who lives in the native tradition says to pay attention to these signs ~ that the animals are telling us something. Some people say HAARP and the Hidron Collider are ramped up causing the vibrations/frequencies to be altered.

A Pentagon official was murdered and dumped in a landfill. I find it hard to believe these are not connected. My eyes and ears are open.