It has been a while since I've shopped for vintage postcards. But I've been browsing various sources recently, and have come across views I'd not seen before. It is unusual to find old postcards of Cullowhee showing anything besides the Baptist Church, but this one from 1927 features Moore Dormitory: 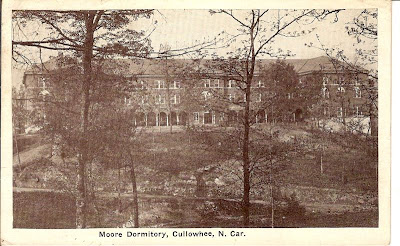 The Virtual Blue Ridge website discusses the one-time dorm on the campus of Western Carolina University:

The Moore Building has many rumors around it regarding the haunting. The actual story is this: A young woman, enrolled in the teaching program, was murdered in the mid-sixties by a local resident when she refused his romantic advances. The man was caught, however, due to his mental capacity and well-respected family connections, he served only a few years at Broughton Hospital in Morganton.

The 3rd floor began experiencing a haunting shortly after the girl's death. It is true that students began refusing to live on the 3rd floor due to the sounds of crying, screaming and pacing. Moore was converted to classrooms in the 1980's, yet strange things continued to happen. The man convicted of the girl's murder died in 1997, and the paranormal activity seems to have stopped, although students on the 3rd floor often report getting "the creeps" or feeling like they are being watched.

I found an article by Russell Conover that described other ghosts on campus. The story appeared in the Western Carolinian, (November 10, 2006):

Scott and Harrill Residence Halls may seem like just two more dorms on the campus of Western Carolina University. However, each building has a reputation for being haunted because of some mysterious events that occurred in the past. Current and prospective students of WCU should keep these stories in mind when they select a dorm in which to live.

The early 1990s was the time that Scott Hall began its conversion to "the dark side." During this time, it is said that a female student hung herself in the East Wing of the building. Her motives for suicide are not known, but the legend lives on. The floor was closed for many years afterwards because numerous people reported to have seen the young lady there.

Unusual happenings in the dorm occurred as well, such as bathroom lights going on and off randomly, doors opening and closing when no one is there, and water running for no reason. The spirit of this young lady still seems to reside in Scott Hall, so residents and visitors should exercise caution there.

The fifth floor of Harrill Hall has a similar history of unusual occurrences. According to legend, a girl died of an asthma attack while having a sleepover with her boyfriend. Unfortunately, she suffocated in her sleep. Her ghost is now said to haunt the fifth floor of Harrill, along with the building's elevators. The elevators sometimes open only on the first and fifth floors, but other times they open on all floors when no one is aboard. People on the fifth floor have reported strange occurrences and the feeling of being watched, as well. This girl seems to have influenced numerous parts of Harrill Hall, of which the WCU community should take note.

So, just what makes a certain place "haunted"? Writers Brad and Sherry Hansen Steiger provide some insight about how to tell if a location might be one to avoid. According to the Steigers, "signs of a haunted building include knocks and rappings throughout the building, doors opening and slamming, cold drafts, and ghostly figures." They continue, "Genuine haunted houses soak up emotional unpleasantness from their former occupants." Locations with these characteristics should caution visitors that some unusual things happen inside. The residents of a particular building have much to do with whether it is haunted. "Almost any place could be haunted since most places have lots of human emotion in them," say the Steigers. "Hauntings occur from a merging of two figures: the original occupants in the past merge with the new occupants in the present day," they continue. "Collective emotions or thought processes of people who have lived somewhere in the past may have intensely 'charged' the psychic atmosphere of the place," say the Steigers.

As a result, whether a location is haunted depends largely on the people that spend time there. The Steigers also provide information on ghosts. "Ghosts could be manifestations of past events that resurface in the present day." However, ghosts are nothing to be concerned about, as the Steigers detail, "There is nothing paranormal about seeing a ghost; once we figure out the emotions behind a ghost, it is easy to 'de-haunt' a certain place." Although many people think of ghosts negatively, the Steigers suggest that they are not as frightening or awful as society may believe. Whether in residence halls on the campus of Western Carolina University or in any other building, strange things happen to people. However, wouldn't life be so much more boring and uneventful if nothing ever changed from day to day? While the reports from Scott, Harrill, and society are not always happy-go-lucky, the events that occur there certainly keep people on their toes.

Casting a wider net, I found a couple of iterations of one local school tragedy. Though the elementary school was never precisely identified, I pictured the Canada School (I visited the school once when classes were in session and it was a truly wretched place). I have my doubts about this one (as if I don't have doubts about all these tales):

In Jackson County, NC, the story is that 15 or 16 little kids got detention at an Elementary school and were locked in the boiler room. The boiler exploded and killed the kids.

Now if you go late at night then you can hear screams, sometime you will see little kids, if you take pictures and get developed you will see orbs and strange smoke that is in the shape of people. But when you look at the spots in person there is nothing, but in the picture there is freaky stuff. On the walls in the boiler room, there are child size hand prints burned into the wall.

In 2005, no screamings were detected but strange paranormal stuff. A well-defined shadow of a little kid was seen through one of the glass doors in the school. The investigators watched this figure move from side to side of the door and then it walked toward them through the door and stood still for around 30 seconds.

All of the sudden it bent down and got into like a 3 point stance and then jumped toward them. They turned the lights on there was nothing there.

They placed a voice recorder in the boiler room as well and got what sounded to be a heart that kept getting faster and louder and then made one loud beat and stopped.

Also there was a loud moaning through tout the whole school house from the pipes but there was no heat going through the pipes so I have no clue why that would be making noise.

An update to make on the school was that, it was demolished a year ago and made into a park for the community.

Ever since they made the park where the old middle school was, other sightings have been reported.

Again, this is a true story.

I love that coda...as if we needed convincing. Finally, here's one from Dillsboro Road, Sylva:

A shadow looking like a man and the feeling of not being alone and watched, voices and strange screams have been reported. There are spots along the road that are warm at first then they become ice cold a few steps further. Years ago there was a murder of a woman and her husband. There have also been numerous accidents involving both humans as well as animals on this road. These accidents have been rumored to be caused by the man and woman that were murdered.
.
Posted by GULAHIYI at 12:01 AM

I lived in Scott in the early 1990's I do not remember anyone dying there.

Local resident here who had friends in Scott and Harrill in the early 90s. The odd events were happening before then and stories were set in the 80s at that point. The elevator constantly opened in the lobby, with no one in or around it and would do the same on particular floors. While attending a party one night I also had a bathroom stall door swing in on me so hard that it knocked me unconscious. I had checked the bathroom when I went in, I was alone and heard no one else enter, and had just unlocked the stall door was starting to open it when it happened. I still remember the sound. Like someone had kicked it with incredible force. I caught a glimpse of the mirror in front of the sink as the door came open and no one was there. I woke up some time later, outside of the stall, in the middle of the bathroom floor. I had not been messed with, and according to a friend at the party people were getting worried and ready to look for me when I returned. I have no idea how long I was out. Of course my first thoughts were a person had done something but as I gathered myself and thought about what happened, it was more than odd. The thing is, all of this happened in Harrill.


The story surrounding Moore is true. I know people who worked the search teams and the woman's body in the woods near Glenville. Horrible crime! The man was insane and had the mentality of a child. He lived at the end of a road several members of my family and friends live on. He spent his remaining days in his family home which never had power or water but had a large 1980s satellite dish in the yard. Freaky.

Thanks for the comment. Wow, those are great stories. I also remember when you'd see those huge dishes everywhere around here.

In 03-04 i lived in Scott on the 8th floor. Second semester(freshmen year) me and a friend moved down the hall to room 817(if I remember correctly) It was said that is were the girl hung her self there as it was the only room with a exposed pipe...all the stories were true bathroom doors swinging water turning on etc. I have many scary stories about that room. Dead serious we all saw it and lived with it and just got use to it. We visited the elementary school with the boiler room. I never saw any thing or heard any thing but it sure was creepy!

There was never a hanging at Scott Hall, it's just a legend that keeps repeating itself....but, I worked at Western and had an encounter on the 6th floor during spring break when nobody was there. Shadow figure and a feeling of dread/sadness. I believe there are transient spirits in Scott who come and go and is the only explanation I have, but I know what I saw and the way it made me feel. I'm a 43 year old man and only told my wife this story, who else would believe me?!?!?!