Invasion of the Robins

When I was a little kid in the schoolyard, the reappearance of robins was always a welcome sign of spring’s arrival. I didn't know much about robins. They hopped. They ate worms. Their eggshells were a nice shade of blue. In the years since then, I haven't learned much more than that about them and I haven't considered the migratory behavior of Turdus migratorus…until this winter. 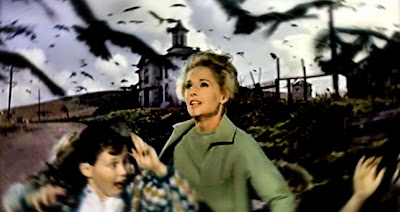 While reading a local birders’ message board, I was alerted to the presence of a huge wintering flock of robins, along the Tuckasegee River, just below Cullowhee. The source of that news estimated that 100,000 robins were roosting in the bamboo and trees near the trailer park. In fact, while driving past that location yesterday evening around 6:00, I saw a birder watching for the nightly return of the robins to the thickets lining the river.

My first encounter with the flock came when I observed them ravaging the holly trees belonging to a friend in Webster. After those birds deposited great gobs of semi-digested holly berries all over my car, I got some inkling of why robins were named Turdus migratorus.

Nevertheless, I still like robins. And when I see them, I usually hear that old ditty, “When the Red, Red Robin Comes Bob-Bob-Bobbin’ Along.” Yes, like Dean Martin sang it.

A couple of Fridays ago, on a drizzly day, I got a good look at the largest flock of robins I’ve ever seen. Thousands of them were grazing at Cullowhee Rec Park from one edge of the fields to the other. It was quite a spectacle. 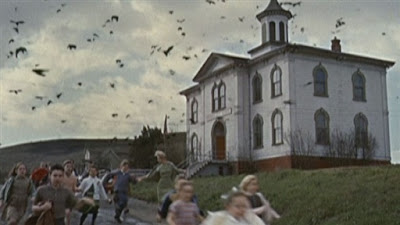 I have learned that robin fans participate in the American Robin Migration Tracking Project. The website has a ton of information on the birds.

From the American Robin website, some excerpts on the classification and physiology of robins:

Robins were named by homesick European settlers for their beloved and familiar little Robin Red-breast, which has a color pattern brighter but somewhat similar to our robin, though the two species are not closely related….

Robins have sturdy legs with muscles designed for running or hopping, allowing them to speedily evade predators and efficiently cover open ground while hunting. Their colors are bright enough to attract mates and defend territories without being so bright to alert predators too often. Their syrinx ("song box") has complex muscles allowing them to sing rich, complex songs that can carry a long distance. Their esophagus is exceptionally stretchy to allow them to eat huge quantities of berries before nightfall in winter, to allow them to survive cold temperatures without being able to eat in the dark. Their intestines are developed for digesting waxy berry coatings and for getting most of the food value out of worms. Their wings have a pointed shape, the most common shape for birds that migrate using a flapping flight. Their tail is medium-length for quick steering as they fly through branches…

Robin vision is a little more discriminating than ours--it can see things at a farther distance, and may be able to see a wider spectrum of colors than we can. A robin can react to sights much more quickly than we can, to allow it to react as it flies through branches at 20 m.p.h. A robin's hearing is much more finely tuned than ours. It can hear higher-pitched sounds than we can, and can hear tiny differences in sound quality that our ears just simply can't detect. It's sense of touch is not as discriminating as ours in some ways, though it can weave a nest with amazing accuracy relying partly on this sense. Robins can probably not taste as many flavors as we can, and they probably cannot smell as many odors… 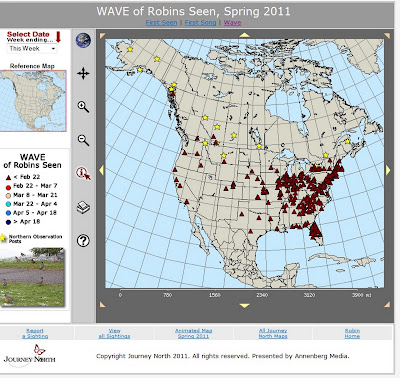 Robins don’t necessarily go south for the winter, but will overwinter almost anywhere in the eastern US.

Robins are a migratory species, but their migration is far more complicated than simply a shift southward. There seems to be a great deal of individual variation in where they spend the winter, though males are far more likely to remain in the north than females. There are good reasons. Come spring, the male’s main job is to find and defend a territory. The females’ main job is to create and lay the eggs. This requires a lot of good nutrition and food energy, so females go where they are sure of good food supplies in winter. Yes, they have to use up food energy to migrate north. But migrating and laying eggs are easier for well-nourished birds.

One frequently asked question is, “Why am I seeing thousands of robins this winter and never before?”

People noticing robins in areas where they haven't been seen before, it is likely because the robins have discovered a rich food source. 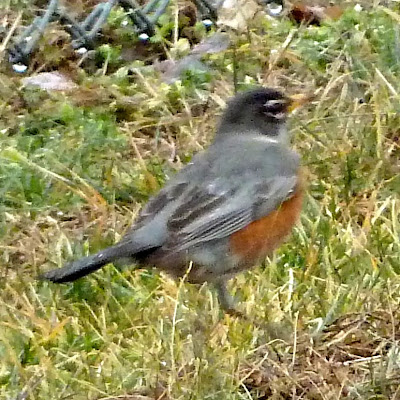 Which raises a question: “What changes have occurred in the local ecosystems to foster an abundance of whatever it is that is attracting the robins this winter?”

And, unfortunately, I don’t have the answer to that one.

The robin laughed in the orange-tree:
"Ho, windy North, a fig for thee:
While breasts are red and wings are bold
And green trees wave us globes of gold,
Time's scythe shall reap but bliss for me
-- Sunlight, song, and the orange-tree.

Burn, golden globes in leafy sky,
My orange-planets: crimson I
Will shine and shoot among the spheres
(Blithe meteor that no mortal fears)
And thrid the heavenly orange-tree
With orbits bright of minstrelsy.

If that I hate wild winter's spite --
The gibbet trees, the world in white,
The sky but gray wind over a grave --
Why should I ache, the season's slave?
I'll sing from the top of the orange-tree
`Gramercy, winter's tyranny.'

I'll south with the sun, and keep my clime;
My wing is king of the summer-time;
My breast to the sun his torch shall hold;
And I'll call down through the green and gold
`Time, take thy scythe, reap bliss for me,
Bestir thee under the orange-tree.'" 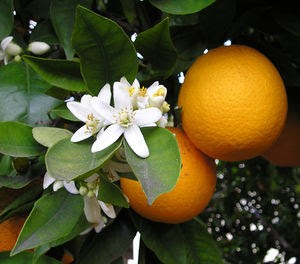 My question for the birders is what will the cedar waxwings eat when they come through?
Normally the cedar waxwings migrate through the area right about now and clean my holly trees. The robins have cleaned the hollies already and I'm guessing a number of other similar food sources.
While the robins might eat berries when available they don't seem like a preferred food source since they were only able to partially digest the holly berries as evidenced by their droppings.
The cedar waxwings convert the berries into something much more like well digested poop.
So what will they do or will we miss their migration?

Those waxwings are beautiful birds with colorful wing markings if you get close enough to see them. I'm sure the behavior of birds tells us a great deal about changes in the environment, if we pay attention. I've been meaning to post a story on Shepard Krech III. He spoke in Highlands and has written "Spirits of the Air, Birds and American Indians in the South." Krech says the Cherokees had names for 110 different groups of birds. He goes into the etymology of many Cherokee names for birds, i.e. "Love sick" was the meaning behind the Cherokee name for the red tail hawk, so named for its whistle, which was perceived as a sign of loneliness. According to Krech, the robin was commonly hunted and consumed during the 18th century in the South.