I remember my earliest excursions on the Horsepasture River. Thirty years ago, it was a word-of-mouth find. This was before the publication of dozens of new hiking maps, trail guides and waterfall books that direct you to the most obscure treasures of the mountains. This was before the Internet! 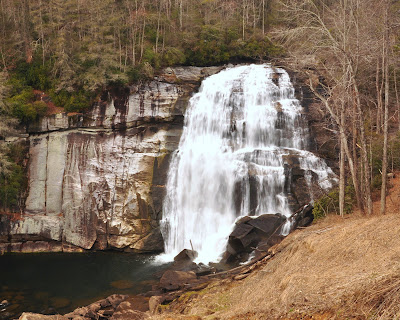 Back then, those in the know could park alongside Highway 281, near the bridge over the river. Then it was simply a matter of scrambling down the bank, rock hopping and threading your way to a trail alongside the north bank of the river.

During the past twenty-three years I’ve revisited the waterfalls of Horsepasture River only through fond memories. And a lot has changed. Park on 281 to access the river, these days, and there’s a very good chance you’ll get arrested. With that corridor to the river shut off, the establishment of the Gorges State Park has provided another way in, although with a much longer walk required.

To be accurate, I did return to the river a couple of years ago after the new and improved Gorges park reopened, but I’d gotten such a late start there was no time for exploring waterfalls. Today, I finally got to see those waterfalls once again. Rainbow Falls Trail begins as a state park trail and then continues on the Pisgah National Forest. The trail ends at a barricade you can't miss, with signs identifying the private property boundary and promising prosecution for trespassers.

Fortunately, that point is within view of Highway 281 and also within view of Drift Falls, the first waterfall downstream from the highway bridge. Rainbow Falls, approximately 125 feet tall, may be the standout, but I don’t know of many other short stretches of river with such a variety of impressive falls. 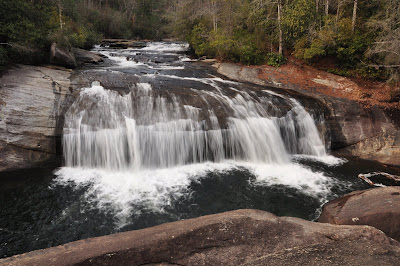 If you’re walking upstream from Gorges, you’ll reach (in order) Hidden Falls, Rainbow Falls, Turtleback Falls and (a view of) Drift Falls. Sonme of these go by two or three names, which can confuse the situation. There are other nearby falls that I missed today. 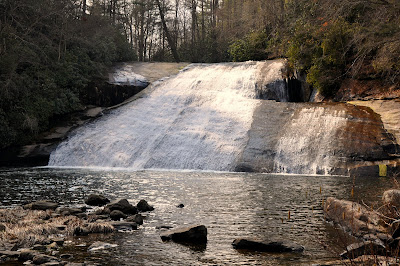 With a little over 4 miles of the Horsepasture specified as a National Wild and Scenic River, it is one of the shortest rivers in the system. The Horsepasture got its name from the bottomlands where the river is joined by Laurel Fork Creek and the Toxaway River, an area that is now flooded by Lake Jocassee. 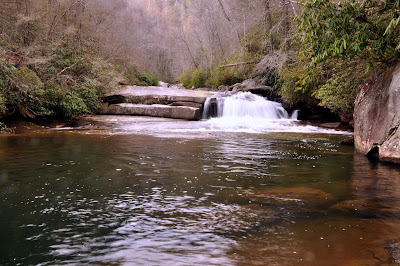 Protection for the Horsepasture came in the mid-1980s after an ominous announcement by a California power company. Carrasan Power Company had plans to build a dam above Drift Falls, capture all the water from the river and run it through a 2.5 mile pipe to a power house below Windy Falls. A vocal and effective opposition arose to thwart the power company. If not for their determined efforts, the most scenic stretch of the Horsepasture might have been turned into a dry and silent jumble of boulders.