Power resides in the moment of transition
from a past to a new state.
-Ralph Waldo Emerson, “Self-Reliance” 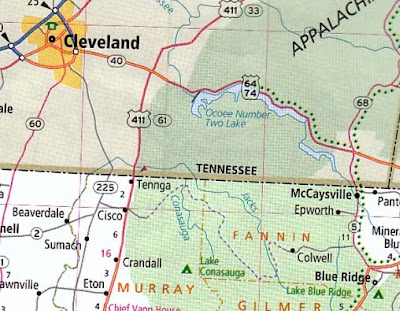 I am a map fanatic. So when I replaced my Georgia roadmap the other day, I spent a while perusing the new one and found an unfamiliar place, or at least a place unfamiliar to me: Tennga - on the Tennessee line.

I remember, long ago, a trip from the North Carolina piedmont to Washington, DC. Just before reaching Virginia, we hit a town called Virgilina. I was young at the time, but not too young to snicker at the sound of that name. And I did contemplate what it would be like to live in a town with a “novelty” name.

With Tennga and Virgilina in mind, I searched my memory for similarly-named border towns, but couldn't come up with much more than Texarkana.

I figured there must be at least three or four others, and that googling “tennga virgilina texarkana” would point me in the right direction. Sure enough, the first result on the list was from usends.com, a nifty site for road buffs, which compiles a long list (approximately 70) of such portmanteaus, and has an interactive map.

In addition to the aforementioned towns, there are two Alabama towns near the Florida border: Alaflora and Florala.

Mexhoma, Oklahoma is near the New Mexico line.

Vershire, Vermont is just across the line from New Hampshire.

And while we're on the subject:
http://www.youtube.com/watch?v=rSaC-YbSDpo

I like the name of the Idaho town on the Nevada border: Idavada.

Some names aren’t quite as mellifluous:

Wyuta (towns in Wyoming and Utah)

Closer to home, I learned of Carova Beach, NC and closer still, Tennelina, NC. I’d never heard of that one, even though it is located in Madison County, near Hot Springs.

Robert Temple has written a whole book on this topic, Edge Effects: The Border-Name Places and devotes an entire chapter to the story of Tennelina. (The post office for the mountain settlement took on the name, Tennelina, around 1903.) Temple’s book is a travel narrative, somewhere between William Least Heat Moon and Charles Kuralt. The author himself calls it an obsession, visiting these oddly named border towns. And in the process, he gathered stories from Tennelina to Carotenn to Dakomin to Kanorado.

With names like those beckoning, I’d better add some more destinations to the long list of obscure places I want to visit.

And from the other side of the border, Calexico:
www.youtube.com/watch?v=ZfidKiHSlbw

Thanks for those musical selections. I'd heard one song by Calexico before, and after hearing this, I wonder why I never sought out more. Good band!