This balmy weather encourages thoughts and deeds of gardening. I've already done an inventory of seeds saved from last year. And I got together an order for some new seeds from Heavenly Seed, LLC, Anderson, SC (more or less the successor to the Bradshaw seed service that came out of Clemson). 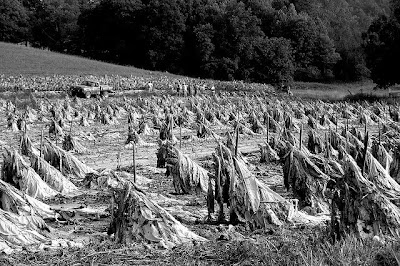 Of the latter, the catalog explains:

In 1802 a settler in Kentucky killed a wild turkey. While cleaning the turkey, he discovered two unusual seeds in the gizzard. Curious to see what they might produce he planted them. Very vigorous growing, the turkey gizzard bean should be provided a sturdy trellis and planted early. Large coarse leaves and heavy vines characterize this variety. This bean is well suited to canning and has a tasty nutty flavor when cooked. Attractive marshmallow cream and brown appaloosa pattern seeds are attractive for crafts.

And it’s like that all way through the catalog. I managed to keep the order list short, but I couldn’t resist this one from the Bradshaw Heirloom Collection:

Cherokee Ceremonial Tobacco
This is the original Nicotiana rustica used by the Cherokee Indians during various ceremonies, rites of passage, etc. A small growing tobacco, it grows about knee high with several stalks arising near the crown. Each stalk terminates with a large cluster of flowers. A rather pervasive pungent odor is released from the leaves during times of high humidity.

I’ve always been curious to grow tobacco. It sure was a part of a North Carolina that I was witness to, way back when. And the plant has a long history here.

In Advanced Civilizations of Prehistoric North America, Frank Joseph addresses the role of tobacco for the Hopewell culture that occupied the eastern part of this continent, two thousand years ago:

…tobacco was probably considered the holiest herb: it’s smoke and the mildly altered states of consciousness it produces were intimately connected with the spirit world. The pipes were not smoked for pleasure alone, but more for purposes of communication with afterlife entities who provided the tribe with guidance and protection.

Evidently, the nicotine level in the Nicotiana rustica plant is much higher than that in the commercial Nicotiana tabacum, which would explain this reference to its potency.

I just want to watch it grow.

In Myths of the Cherokee, James Mooney shares two versions of this tobacco story:

6. How They Brought Back The Tobacco

In the beginning of the world, when people and animals were all the same, there was only one tobacco plant, to which they all came for their tobacco until the Dagûl`kû geese stole it and carried it far away to the south. The people were suffering without it, and there was one old woman who grew so thin and weak that everybody said she would soon die unless she could get tobacco to keep her alive.

At last the Hummingbird offered, but the others said he was entirely too small and might as well stay at home. He begged them to let him try, so they showed him a plant in a field and told him to let them see how he would go about it. The next moment he was gone and they saw him sitting on the plant, and then in a moment he was back again, but no one had seen him going or coming, because he was so swift. "This is the way I'll do," said the Hummingbird, so they let him try.

He flew off to the east, and when he came in sight of the tobacco the Dagûl`kû were watching all about it, but they could not see him because he was so small and flew so swiftly. He darted down on the plant--tsa!--and snatched off the top with the leaves and seeds, and was off again before the Dagûl`kû knew what had happened. Before he got home with the tobacco the old woman had fainted and they thought she was dead, but he blew the smoke into her nostrils, and with a cry of "Tsâ'lû! [Tobacco!]" she opened her eyes and was alive again.

The people had tobacco in the beginning, but they had used it all, and there was great suffering for want of it. There was one old man so old that he had to be kept alive by smoking, and as his son did not want to see him die he decided to go himself to try and get some more. The tobacco country was far in the south, with high mountains all around it, and the passes were guarded, so that it was very hard to get into it, but the young man was a conjurer and was not afraid. He traveled southward until he came to the mountains on the border of the tobacco country. Then he opened his medicine bag and took out a hummingbird skin and put it over himself like a dress. Now he was a hummingbird and flew over the mountains to the tobacco field and pulled some of the leaves and seed and put them into his medicine bag. He was so small and swift that the guards, whoever they were, did not see him, and when he had taken as much as he could carry he flew back over the mountains in the same way. Then he took off the hummingbird skin and put it into his medicine bag, and was a man again. He started home, and on his way came to a tree that had a hole in the trunk, like a door, near the first branches, and a very pretty woman was looking out from it. He stopped and tried to climb the tree, but although he was a good climber he found that he always slipped back. He put on a pair of medicine moccasins from his pouch, and then he could climb the tree, but when he reached the first branches he looked up and the hole was still as far away as before. He climbed higher and higher, but every time he looked up the hole seemed to be farther than before, until at last he was tired and came down again. When he reached home he found his father very weak. but still alive, and one draw at the pipe made him strong again. The people planted the seed and have had tobacco ever since.

In the Iroquois story of “The Lad and the Chestnuts,” the Cherokee myth is paralleled with the substitution of a chestnut tree guarded by a white heron for the tobacco plant watched by the geese. 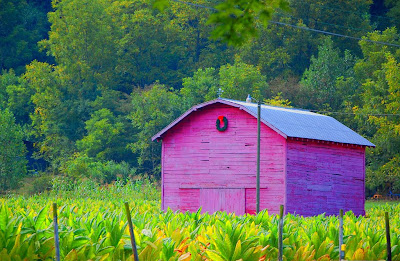 Writing from Asheville in May 1848, Charles Lanman related another tobacco story:

Before visiting this remarkable passage through the mountains [Hickorynut Gap], I endeavored to ascertain, from the Cherokees of Qualla Town, its original Indian name, but without succeeding. It was my good fortune, however, to obtain a romantic legend connected therewith. I heard it from the lips of a Chief who glories in the two names of All Bones and Flying Squirrel, and, though he occupied no less than two hours in telling the story, I will endeavor to give it to my readers in about five minutes.

There was a time when the Cherokees were without the famous Tso-lungh, or tobacco weed, with which they had previously been made acquainted by a wandering stranger from the far East. Having smoked it in their large stone pipes, they became impatient to obtain it in abundance. They ascertained that the country where it grew in the greatest quantities was situated on the big waters, and that the gateway to that country (a mighty gorge among the mountains) was perpetually guarded by an immense number of little people or spirits. A council of the bravest men in the nation was called, and, while they were discussing the dangers of visiting the unknown country, and bringing therefrom a large knapsack of the fragrant tobacco, a young man stepped boldly forward and said that he would undertake the task. The young warrior departed on his mission and never returned. The Cherokee nation were now in great tribulation, and another council was held to decide upon a new measure. At this council a celebrated magician rose and expressed his willingness to relieve his people of their difficulties, and informed them that he would visit the tobacco country and see what he could accomplish. He turned himself into a mole, and as such made his appearance eastward of the mountains; but, having been pursued by the guardian spirits, he was compelled to return without any spoil. He next turned himself into a humming-bird, and thus succeeded, to a very limited extent, in obtaining what he needed. On returning to his country, he found a number of his friends at the point of death, on account of their intense desire for the fragrant weed; whereupon he placed some of it in a pipe, and, having blown the smoke into the nostrils of those who were sick, they all revived and were quite happy. The magician now took it into his head that he would revenge the loss of the young warrior, and at the same time become the sole possessor of all the tobacco in the unknown land. He therefore turned himself into a whirlwind, and in passing through the Hickory Nut Gorge he stripped the mountains of their vegetation, and scattered huge rocks in every part of the narrow valley; whereupon the little people were all frightened away, and he was the only being in the country eastward of the mountains. In the bed of a stream he found the bones of the young warrior, and having brought them to life, and turned himself into a man again, the twain returned to their own country heavily laden with tobacco; and ever since that time it has been very abundant throughout the entire land.
Posted by GULAHIYI at 12:01 AM