The legend of Nacoochee, the Evening Star, has been around for a while. The story is usually, though not always, set in the valley of the same name in White County, just south of Helen, Georgia. 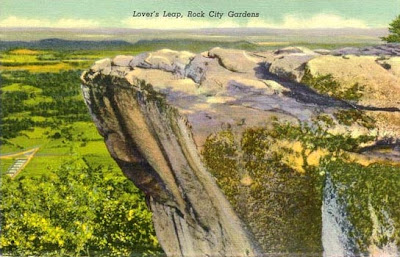 Of course, the Nacoochee tale warrants a place among stories of other nearby "lovely Indian maidens." The seraglio of legendary maidens includes Occoneechee, Trahlyta, Cateechee, Jocassee, Connestee and Toccoa, a bevy of native beauties. Few, if any, of these stories have any basis in actual Native American history and myth. But the motif/stereotype/fantasy persists in word and image. Here are their stories: http://gulahiyi.blogspot.com/search/label/indian%20maidens

That fabulous tourist mecca - Rock City – adapted the Nacoochee legend to fit the precipitous “Lover's Leap” on Lookout Mountain. As the brochure says:

Sautee was a brave from a tribe that was feuding with the Cherokee Indians. Nacoochee, the Evening Star, was the beautiful daughter of the Chief of the Cherokees. The two met and formed a beautiful and strong love. When Nacoochee’s father discovered this love, he condemned Sautee to death by being thrown from the precipice of Lookout Mountain. Nacoochee was forced to witness his death and was so distressed, she leapt from the cliff to her death. From that day forward this cliff became known as Lover’s Leap.

Get back to White County, though, and this might be the Nacoochee tale that you'll hear:

A legend regarding the Nacoochee Mound tells the story of two Native Americans: Sautee, a brave of the Chicksaw tribe, and Nacoochee, the daughter of a Cherokee chief. Although from opposing tribes, Sautee and Nacoochee fall immediately and hopelessly in love. They meet at night and run away to nearby Yonah Mountain to spend a few idyllic days together. Later, they present Nacoochee’s father, Chief Wahoo, with the idea of creating peace between the two nations. In response, the chief orders Sautee be thrown from the high cliffs of Yonah Mountain. Nacoochee watching in horror, breaks away from her tribe and leaps from the cliff to join her lover. Sautee and Nacoochee drag their broken bodies together, and, locking in a final embrace, they die there. The Cherokee chief, realizing the greatness of their love, is overcome with grief and remorse, so much so that he has the lovers buried together, in the mound near the banks of the Chattahoochee River. 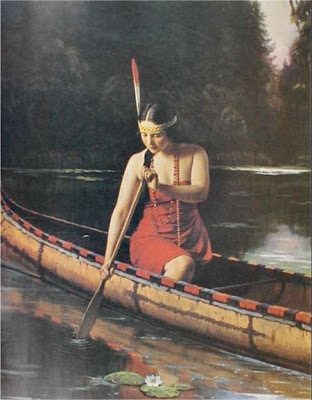 I couldn't locate an artist's rendering of Nacoochee, so perhaps we can imagine this generic "Indian Maiden" as Nacoochee, herself, on the Chattahoochee.

I did find one much older recitation of the Nacoochee legend, published in the journal, Confederate Veteran (1916). What a magazine! Their 1916 New Year's greeting is a sort of mission statement for the publication:

From the threshold of another year the Veteran sends its greetings to its thousands of friends all over this great country, with the wish that this year of 1916 may bring them many blessings. Nearly twenty-five years ago the Confederate Veteran came into existence as a modest little publication devoted to the interests of the Confederate organizations. It has grown with the years, but is still devoted to the same interests and ever working to secure a true record of the War between the States. There is much error yet to be corrected. The sensational press is continually resurrecting myths of history. Historians do not go far enough in their research to find the truth. It is the province of the Veteran to place these truths before them, that future generations may rightly understand the Southern people and the principles for which they fought. Its work, therefore, is not yet finished; there is much more to be recorded while there are still survivors of that mighty conflict. These records should be gathered from every community of the South. Much is being done along that line by the Daughters of the Confederacy in their history work, and they should have the cooperation of all who want the South to have her rightful place in history. 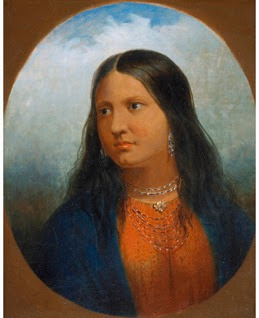 Let's take the romantic imagery of the lovely Indian maiden back, way back, to 1840, when Alfred J. Miller painted this "Portrait of an Indian Maiden"

Anyhow, the Confederate Veteran brought us this Nacoochee story:

The aborigines lived so near the heart of nature that they learned her secrets and were unconscious poets. Their language, abounding in vowels, was soft and musical. Every proper noun had a meaning that was significant and often wonderfully poetic, as Cohuttan (Frog Mountain), Tallulah (terrible), Toccoa (beautiful), Amicalolah (tumbling water), Hiwassee (pretty fawn), Okefinokee (quivering earth), and Chattahoochee (rocky river). Neither the Creeks nor the Cherokees had a written language, and their history is a matter of tradition. The Creek language bore a resemblance to classic Greek. Their legends—wild, romantic, often tragic —are still full of interest for their pale-faced successors.

The Legend Of Nacoochee.

Long before the Anglo-Saxon had made his first footprint on these Western shores there dwelt in a lovely valley in North Georgia a young maiden of wonderful, almost celestial, beauty. Her name was Nacoochee (The Evening Star). She was the daughter of a chieftain, and in doing honor to her the people of her tribe almost forgot the Great Spirit who made her and endowed her with such strange beauty.

A son of the chieftain of a neighboring hostile tribe saw the beautiful Nacoochee and loved her. He stole her young heart, and she loved him with an intensity of passion that only the noblest souls can know. They met beneath the holy stars and sealed their simple vows with kisses. They found fitting trysting places in this charming valley, where, from the interlocked branches overhead hung festoons in which the white petals of the clematis and the purple blossoms of the magnificent wild passion flower mingled with the dark foliage of the muscadine. The song of the mocking bird and the murmur of the Chattahoochee's hurrying waters were marriage hymn and anthem to them. They vowed to live and die together.

Intelligence of these secret meetings reached the ear of the old chief, Nacoochee's father, and his anger was terrible. But love for Laceola was even stronger in the heart of Nacoochee than reverence for her father's behests.

One night the maiden was missed from the village. The old chief commanded his warriors to pursue the fugitive. They found her with Laceola, the son of a hated race. Instantly an arrow was aimed at his breast. Nacoochee sprang before him and received the barbed shaft in her own heart. Laceola was so stupefied by this terrible catastrophe that he made no resistance to his enemies, and his blood mingled with hers. The lovefs were buried in the same grave, and a lofty mound was raised to mark the spot.

Deep grief seized the old chief and all his people, and the valley ever afterwards was called Nacoochee. A solitary pine, which was long a landmark in this lovely vale, sprang up from the mound which marked the trysting place and grave of the maiden and her lover. (This mound was opened in 1915 and found not to antedate De Soto's visit.)

Legend of the Cherokee Rose.

A proud young chieftain of the Seminoles was taken prisoner by his enemies, the Cherokees, and doomed to death by torture; but he fell so seriously ill that it became necessary to wait for his restoration to health before committing him to the flames.

As he was lying, prostrated by disease, in the cabin of a Cherokee warrior, the daughter of the latter, a dark-eyed maiden, was his nurse. She rivaled in grace the bounding fawn, and the young warriors of her tribe said of her that the smile of the Great Spirit was not so beautiful. Was it any wonder that, though death stared the young Seminole in the face, he should be happy in her presence? Was it any wonder that they should love each other?

Stern hatred had stifled every kindly feeling in the hearts of the Cherokees, and they grimly awaited the time when their enemy must die. As the color slowly returned to the cheeks of her lover and strength to his limbs, the dark-eyed maiden eagerly urged him to make his escape. How could she see him die? But he would not agree to seek safety in flight unless she went with him. He could better endure death by torture than life without her. 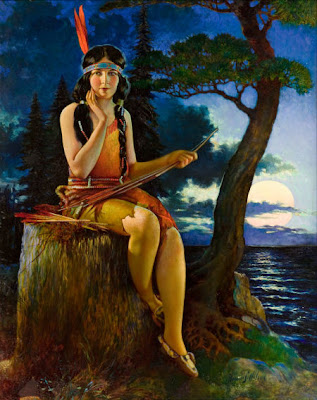 For an image of "the lovely Indian maiden" this is about as classic as it gets. By Homer Nelson, ca. 1930. The Land O' Lakes butter girl meets Maxfield Parrish.

She yielded to his pleading. At the midnight hour silently they slipped into the dim forest, guided by the pale light of silvery stars. Yet before they had gone far, impelled by soft regret at leaving her home forever, she asked her lover's permission to return for an instant, that she might bear away some memento. So, retracing her footsteps, she broke a sprig from the glossy-leafed vine which climbed upon her father's cabin and, preserving it during her flight through the wilderness, planted it by the door of her new home in the land of the Seminoles, where its milk-white blossoms, with golden centers, often recalled her childhood days in the faraway mountains of Georgia.

From that time this beautiful flower has always been known throughout the Southern States as the Cherokee rose.

The Indians have passed away from this beautiful land they loved so well, but the memory of them still lingers and will linger forever in the melodious names of Georgia's mountains, rivers, and vales.
[Great injustice has been done to Georgia in regard to her treatment of the Indians, and this wrong of history must be righted.—Miss Rutherford.]

TO A MOCKING BIRD.
The name thou wearest does thee grievous wrong.
No mimic thou; that voice is thine alone.
The poets sing but strains of Shakespeare's song,
The birds but notes of thine imperial own.
—Henry Jerome Stockard

Great story. Waiting to see if you incorporate some romance into your e-book. What will happen with Daniel and Lola...? Please continue that story.

I'm not sure about Daniel and Lola...after one particularly vicious (if not unwarranted) critic's review, that train of thought might be permanently derailed. No great loss. Then, too, after incurring the wrath of the arbiters of Progess and Enlightenment from the "brew pub on the Tuck" set, I'm about ready to shut up for good. I just need to see if there's anyone I HAVEN'T pissed off before quitting this for good.

In a town where all one has to do to be hailed for "cutting-edge journalism" is gush about microbrews and mountain bikes, it probably doesn't make sense to do something like this unless you're making money off of it.

As far as these "lovely Indian maiden" stories go, something about them really bothers me, but I haven't yet found a way to explain what it is. Maybe it has to do with that very fine line between celebrating and exploiting culture.

you know what, if people don't like what you have to say, they can take a flying leap.

this site, notice i did not say blog, is by far, one of the best reads out there. i look forward to the posts and read them thoroughly.

i'm afraid journalism in this area is a bit diluted anymore. that is if you call what some people do journalism. you write original posts. rather than write an intro then copy and paste someone else's work with attribution. there is much that can be said about that.

keep up the good work.