Physicists say we are made of stardust. Intergalactic debris and far-flung atoms, shards of carbon nanomatter rounded up by gravity to circle the sun. As atoms pass through an eternal revolving door of possible form, energy and mass dance in fluid relationship. We are stardust, we are man, we are thought. We are story. — Glenda Burgess 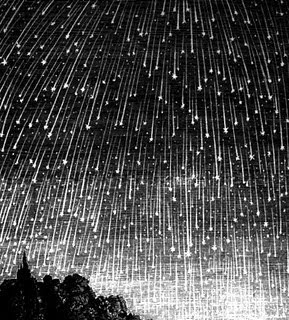 While trying to find some old documents on NC meteors, I did track down an article from the Journal of the Elisha Mitchell Scientific Society, Vol 7 (1890) - "A List and Description of the Meteorites of North Carolina," by F. P. Venable. He catalogues the 23 meteorites then known to have fallen in North Carolina.

On the Meteoric Stone from Ferguson, Haywood County, North Carolina. Mr. W. A. Harrison, of Ferguson, Haywood County, North Carolina, says: that about six o'clock on the evening of July 18, 1889, he noticed a remarkable noise west of him, and that fifteen minutes later he saw something strike the earth, which, on examination, proved to be a meteoric stone, so hot that he could scarcely hold it in his hand five minutes after it fell. Two-thirds of its bulk was buried in the earth when found. This stone was sent to the writer and was unfortunately lost in New York city during the month of December. The stone was slightly oblong, covered with a deep, black crust, which had been broken at one end, showing a great chondritic structure with occasional specks of iron. Its weight was about eight ounces: and it very closely resembled the meteoric stone from Mocs, Transylvania. It remained in the writer's possession so short a time that it was not properly investigated, but still the mere mention of a fall which had been so carefully observed is thought to be well worthy of publication.

In the early 1900s Dr. Oliver Cummings Farrington, Curator of Geology in the Field Museum of Natural History, Chicago, published a couple of books on meteorites, including A Catalogue of the Meteorites of North America.(1909) Regarding the distribution of 247 verified meteor "falls” found to date in North America, Dr. Farrington observed:

The greatest massing of meteorites in the whole province of North America occurs in the region of the southern Appalachians, where the states of Kentucky, Virginia, Tennessee, North Carolina, Georgia, and Alabama adjoin. A circle with a radius of 300 miles drawn about Mount Mitchell, North Carolina, as a center, will include nearly half of the known meteorites of North America. Twenty-five of these, or nearly half of the known falls of the continent, are observed falls, and it would seem possible at first thought that many of the meteorites in this area might have come from a single shower. This would reduce the number, but the writer has made a careful study of the history of each meteorite and its geographical relation to those of similar character without finding any support for such a view. Not only does the area contain a large number of observed falls, but the finds embrace a variety of types larger than any known to be produced by a single shower.

Farrington came up with an explanation for this concentration of reported meteorites:

Density of population will increase the number of meteorites known from a region, because the greater the population the greater the number of observers and the more numerous the chances both that the meteorite will be observed when it falls and that it will be found after it has fallen. As regards character of population, a high order of intelligence is favorable not only to the observation but to the preservation of meteorites. The writer has elsewhere called attention to the fact that the distribution of meteorites on a map of the world is almost exactly that of the Caucasian race. This seems to prove quite conclusively that the distribution of meteorites is largely dependent on the degree of civilization attained in a region. That this factor is more important than density of population is shown by the fact that no meteorites are known from China in spite of its immense numbers of people. In the province of North America it is hardly likely that the different degrees of intelligence existing in different regions would exert any discernible influence on the number of meteorites known.
.
Posted by GULAHIYI at 12:01 AM