The conversation turned to coffeehouses and it got me thinking.  What started it was riding past a former church turned coffeehouse.  In the pouring rain, my eyes played tricks on me, and I thought the sign said "free will."  So, maybe this coffeehouse still has a church connection, and you pay as little or as much as you like for a cup of joe, a free will offering. Plausible scenario.  A less likely explanation is that they were distinguishing their establishment from all the deterministic coffeehouses.  But when I rode past the sign later, the rain had slacked off and I saw that it actually said "free wifi."  Well, of course.  How foolish of me. 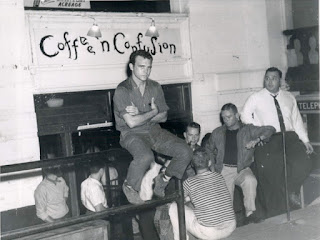 One thing I have learned over the past fifty years is that you might need to explain what you mean by coffeehouse. I'm sure that my introduction to the term referred to a music venue in Greenwich Village where beatniks would go to listen to folk singers.  In that regard, I suppose it would have been possible for a hootenanny to break out at a coffeehouse.  Now, when was the last time anyone used that word "hootenanny?" Without digressing too far down that rabbit trail, here's a helpful factoid from Joan Baez:

A hootenanny is to folk singing what a jam session is to jazz.

I first set foot in a coffeehouse in 1971.  In that day, flower children were few and far between, at least where I lived.  And fancying myself a fledgling flower child, how could I not check out the Friday night coffeehouse at the nearby college?  This took place on the second floor of the student center, heady and exotic stuff for a painfully naive high-school kid. If I recall correctly, they didn't serve coffee.  The lights were turned down low, or maybe the place was illuminated by candles, and I do remember the smell of incense.  This was the heyday of the singer-songwriter and the featured performer fit the bill perfectly.  Steve Duncan was extremely tall, slightly mysterious and a striking fellow in his own way.  When it came to picking a guitar and crooning his own compositions he was way ahead of anyone else I had ever heard in person.  While I'd met people who claimed they had rubbed elbows with the newly famous and monstrously popular James Taylor in Chapel Hill, the Friday night coffeehouse was about the closest I would come to that in my corner of the Piedmont. Looking around the room I saw maybe a half dozen other flower children, requisite bell bottoms and bandanas, sitting cross-legged on the floor, getting lost in the songs.  You could say that I was among "my people."  We wore little brass bells.  It seems so laughable now. 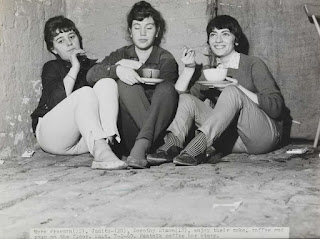 My next recollection of a coffeehouse came a few years later and involved someone from that same college.  Charles Hill was a virtuous wunderkind, and I knew him from the drama department.  I was painfully aware that I couldn't measure up to Charles when it came to acting, directing, earnestness or just about anything else. He could play guitar and sing beautifully and was someone who might have been called a "Jesus freak."  It is difficult to think of that term as anything but pejorative, but there was a brief time when certain zealous believers adopted the label with pride.  I can't say for sure whether that was or was not the case for Charles.  In any event, I do recall the time he showed me around a spacious and quite impressive Christian coffeehouse that he opened in a sleepy litle town called Oakboro.  I have no idea what ever came of it, but I'd like to think the seeds he planted there bore fruit.

You need to keep in mind that this was before the coffee culture that has saturated the country today.  I remember (when was it - sometime in the previous century?) hearing from a fellow that had moved from Cherokee to Seattle and he proclaimed that coffee bars were the next big thing. The next two or three years proved that he was correct.  I had seen other big things come and go - there was a time when any little mountain town had upwards of a half dozen video rental stores, but that trend peaked a long, long time ago.  It was interesting to observe the arrival of coffee culture in these little hick towns I've been familiar with the past few decades. There was one coffee shop near the square in Burnsville and I'm not sure it ever grew into the role it aspired to.  A few years ago I enjoyed some especially good times in Marshall.  The shabbiness of the town was very attractive to me.  The funky juxtasposition of Zuma Coffee, smackdab between the French Road River and the Madison County Courthouse, only added to the appeal of Marshall.  Without Zuma, a gathering place for the multitude of old hippie potters and jewelry makers esconced in all the nearby hollers, the town just would not have been the same. 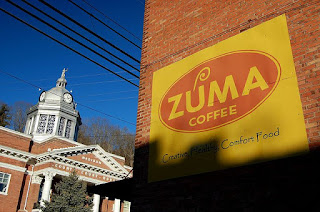 And as I recollect other places I've enjoyed overpriced cups of coffee, I remember Asheville back when it was still fun to go to Asheville, back before it became known as Ashvegas, dropping by Old Europe for coffee and a decadent pastry.  Apparently Old Europe only hired baristas that were gorgeous, in an elegant sort of way. And, during a leisurely evening of people-watching in downtown Asheville, the other customers coming and going from Old Europe were entertaining as well.

Sadly, we no longer live in those good old days.  I don't know why things have gone down the toilet.  Maybe a chunk of our innocence, innocence we didn't even know we possessed, was taken away by 9/11 and by all the government foolishness that came in response to 9/11. There's that.  And then there's all our damned "devices."

I should have known that I didn't drive past the Free Will Coffeehouse Church this evening.  Of course it was "free wifi."  What coffeehouse wouldn't have free wifi?  Why do you even need to put it on your sign?  Sure, let's say it is a flaw in my character (and what a deeply flawed character I am) that causes my feelings of revulsion, disgust, anger, sadness, and grief when I look around any coffee emporium of the present day and see everyone staring into their palms, absorbed in their virtual lifelines.  They look so unhappy. They look so incapable of being present in what I stubbornly continue to call the "real world"  In the past, you might have shared some small acknowledgement of mutual humanity with the person at the next table, even something as subtle as a nod or a half-smile. But that's just soooo twentieth century!  I can't imagine the dreadful consequences from overstepping boundaries and doing anything that might interrupt anyone's wifi reverie these days.

But don't take it from me.  I'm long past the point of being taken seriously on any front.  Consider this from a story aired on All (Politically Correct) Things Considered in 2014
http://www.npr.org/sections/alltechconsidered/2014/04/10/300518819/no-laptops-no-wi-fi-how-one-cafe-fired-up-sales

"To walk into a place and see people looking at their screens with a blank stare, it takes away just kind of the community aspect of it — of you being in a place with other people."

No, those aren't my words.  Those are the words of Jodi Whalen, owner of August First Bakery in Burlington, Vermont, the same town that elected a socialist mayor named Bernie Sanders. And August First is a screen-free coffeehouse, an oxymoron of epic proportions. 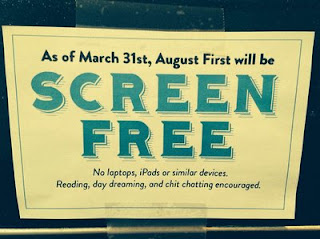 I love the comment thread on this story, beginning with Edward Milhouse.  Is it safe to assume that he is someone who traded in his Volvo for a Prius and owns at least one pledge drive coffee mug?

Edward Milhouse > Siara Delyn  • 2 years ago
In Europe, it's actually considered poor manners to eat and run. In Italy if you spend less than an hour at dinner, you're looked on as a boorish tourist.

Seth Lustig > Edward Milhouse  • 2 years ago
Spend less than an hour, hunched silently over a glowing screen, glowering at any group that has the nerve to be boisterous or talkative? I think not.
The intent here, I believe is to *bring back* some of the social aspect of a coffeehouse.

Edward Milhouse > Seth Lustig  • 2 years ago
True, but at the same time most social conversations nowadays occur on-line. People are socializing and having discussions like crazy, it's just in text form on a screen with people in multiple locations simultaneously. If someone can't meet you at the coffee house, you can still chat with them on your phone while you're having coffee.

And on and on and on it goes.  I suppose if you had a "social conversation" with Edward Milhouse today he could tell you exactly why Bernie WILL be elected President in 2016.  Luc G's response to Edward certainly makes the case for why I am off-base, out of step with the times:

Luc G > Edward Milhouse  • 2 years ago
I think your comment speaks to something I've tried to ask people to consider: the way people socialize in our hyper-connected world will never go back to the way it was before the ubiquity of 'screens'. Stop looking wistfully into the past and try to discover new ways of connecting with your fellow man.  Communication technology and our ability to socialize with anybody at any time has radically altered the public perception of what is acceptable for social environments, and it will do nothing but continue to change that perception as technology continues to get better. Don't get me wrong, I'm all for moments of quiet contemplation over a cup of coffee, but to say that a coffee house isn't a social space because of screens is completely missing the mark. We have to move and think with our eyes to the future, not the past.

ianfrancism > Luc G  • 2 years ago
You're all thinking about this way too hard. She can do whatever she wants with her coffee shop. She doesn't need your suggestions because she is doing great business by getting rid of the computers. If you wanna hang out at a coffee shop in Burlington with your computers or tablets, theres no shortage of coffee shops you can go to.

truth seeker > Edward Milhouse  • 2 years ago
You are right, unlike restaurants coffee shops always made money when people sat did some work, in olden days people used to read news papers and books for hours at a time. She could just keep a time limit for her customers, or charge them for sitting for more time. 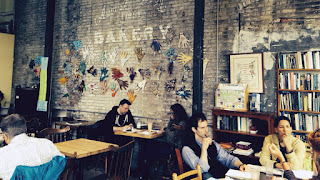 Lord, is it any wonder that I can't take being around liberals anymore?  I should be thankful when they're staring into their own palms and not engaging with me.  By the way, Jodi Whalen didn't make August First screen-free solely for the purpose of saving civilization as we knew it. Banning screen time was good for the bottom line, because it kept customers moving rather than pecking away at their devices all day:

"We saw a lot of customers come in, look for a table, not be able to find one and leave," Whalen says. "It was money flowing out the door for us."

So, maybe August First is the exception that proves the rule.  (Actually, I'm not sure an exception proves a rule, but let's not get started on that.)  And let's face the cold, hard fact of the matter - it's the pot calling the kettle black when I spend too much screen time in private bitching about people who spend too much screen time in public.  Guilty as charged!

Even so, given a choice between a free wifi coffeehouse and a free will coffeehouse, I'll take the latter every time.
Posted by GULAHIYI at 11:30 PM