Forty-plus years ago I strolled around Hannibal, Missouri...on the banks of the Mighty Mississippi.  I remember visiting Mark Twain's boyhood home, right there in the middle of town: 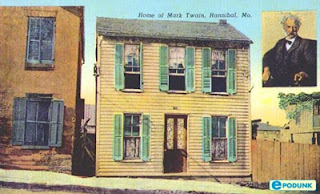 And I remember being mildly annoyed by this sign for "Tom Sawyer's Fence": 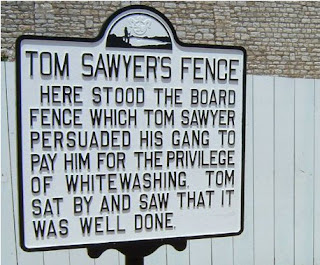 "Either go all historic or go all storybook, one or the other, make up your mind," would have been my demand of the Hannibal Chamber of Commerce.  But I know that's too much to ask of any tourist trap town.  It still makes me wince, though, to see how history gets distorted for the sake of attracting a herd of slack-jawed vacationers.

On the other hand, in this slick age of irony where we're all trying to be acceptably cool in the dominant social order, scuffling for a higher toehold on the totem pole by buying the right lettuce, the right craft brew, the right car, the right shoes, the right blah, blah, blah, it is amazing that the cheesy roadside attractions of old, reeking faintly of mold, are still around and still filling people's heads with misinformation about the history of this proud country. And while I marvel that they can still generate enough traffic to keep the lights on, I know I'll be sad when they're gone, to be replaced by something more virtual and more exhilarating, no doubt. 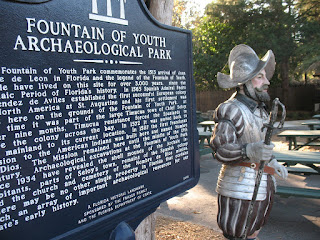 Not long after the Hannibal visit, I went to "The Nation's Oldest City," St. Augustine, Florida and "Ponce de Leon's Fountain of Youth Archaeological Park."  I don't recall any specific historic faux pas other than the whole premise of the place, since neither Ponce de Leon nor his cadre of explorers ever left us any mention of a fountain of any sort, much less Youth.  The legend was born when a fellow Spaniard dissed Leon mercilessly, questioning his manhood, soon after his death -  in 1535 Gonzalo Fernández de Oviedo y Valdés accused Ponce de León of seeking a "fountain of youth" to cure his sexual impotence.  In the following years, one writer after another repackaged the mirthful dig against the conquistador.   Over time, the myth about his "Fountain of Viagra" was domesticated into something more suitable for audiences of all ages. 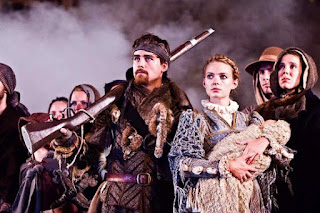 But when it comes to anachronistic cornpone history jazzed up for witless rubes, nothing beats outdoor drama.  Don't get me wrong.  If I were to win an all-expense paid trip to see "The Lost Colony" I would be barreling down US 64 in a cloud of dust - pronto. 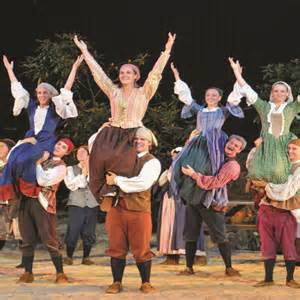 Ten or fifteen years ago, I did make it to "Horn in the West" which had Daniel Boone winning the Battle of King's Mountain or something equally preposterous. I noticed the other playgoers didn't bat an eye at the literary license taken with history.  Actually, the narrative (such as it was) seemed to go right over their heads, though the occasional burst of gunfire, cannon blast or fire dance was sufficient to keep the audience on the edge of its seat, or stir them from their torpor.  I appreciated the stagecraft, if not the credibility of the story. 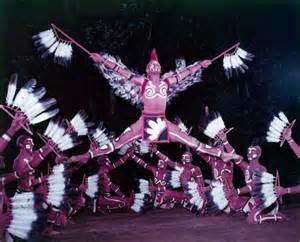 And it was about the same when I attended "Unto These Hills" thirty years ago.  I knew that this rendition of the Cherokee Removal was skewed to something other than historical accuracy, but I admired the effort that went into putting on a big show.  A decade ago, though, the powers that be decided the Kermit Hunter script had reached the end of its useful life. I just retrieved the news release announcing its replacement.

In Cherokee, "Unto These Hills" will be an all-new show, re-written as a celebration of Cherokee history and culture by a Native American author, professor and consultant for 30 years on representations of Native Americans in theater, film and TV shows.

Playwright Hanay Geiogamah also will direct the show, the first Native American to do so in 57 seasons of the story about the Cherokee people....

Opening on June 8, the new "Unto These Hills" will be more musical theater than play, Geiogamah said. Selu, the Corn Mother, and Kanati, the Great Hunter - two major figures in Cherokee legend - will narrate. Spirits of the seven clans of the Cherokee - represented by actors in masks and costumes - ask them to help create a new kind of cultural presentation for the tribe, Geiogamah said. That creative process becomes the new show.

I can understand the urgency of abandoning a script written by an old white guy, but this sounded like trouble from the get-go.  I am certain there is a place for Pretentious Artsy Fartsy High-concept Etherea, and I am equally certain that the Mountainside Theatre in Cherokee is not that place.  Did no one tell Mr. Geiogamah that he needed to tug at the heartstrings of the Dollywood crowd, or at least keep them awake?

In fact, there will be double the previous number of dances, including a war dance and a hoedown. The eagle dance, a highlight of the original show, will return.

"We have devised a way of presenting the story that will be entertaining and informative and definitely move the show along," Geiogamah said. "The driving energy throughout is creativity and renewal."

The old script lacked two major aspects of Cherokee culture, said James Bradley, executive director of the Cherokee Historical Association, which puts on the play: "One, that it was matrilineal, with women playing as important a role as men. The other was the sense of humor that Native Americans have, and how we relate to each other through humor."

The original script by the late Kermit Hunter sympathized with the Cherokee in its portrayal of the tragic removal of most of the tribe from its native Great Smoky Mountains to Oklahoma in 1838. But it left an impression of the Cherokee as a woeful and broken people, Bradley said.

"The new show has the Cherokee rising up from the ruins of that past," he said. "It has more of a spiritual awareness of what being Cherokee means now, and how we implement that."

And that means what, exactly?  It doesn't involve bear zoos, right?

Sure enough, the revamped version of the outdoor drama turned out to be a huge dud, although Knoxville News writer Doug Mason enjoyed it:

It was literate and beautiful to look at. It presented Cherokee culture as a rich and living thing, rather than some dry subject lifted from a fifth-grade social studies text.

And it lasted only one season.

The director of the Mountainside Theatre told me there had been many complaints. The new play was "hard to follow." Regular visitors missed "the story" from the original. How Chief Junaluska led the Cherokee in battle to aid Gen. Andrew Jackson at the Battle of Horseshoe Bend, only to later have President Andrew Jackson sign the decree that would force the removal of the chief's people from their lands. How the noble Tsali sacrificed his life so that a band of Cherokee could remain in their homes and not join the Trail of Tears.

So this year those plotlines are back. And so are the trite storytelling, static staging, and grade-school history lessons. At least the gorgeous dances have been retained.

It was originally intended that Geiogamah's play would run five to seven years, and then be replaced by a new play hopefully written by a Cherokee (Geiogamah is Kiowa). 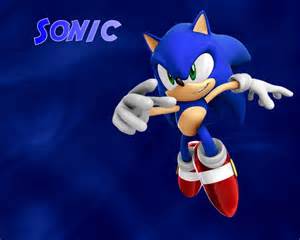 Instead, the 58th season of the country's second-longest-running drama introduced "Unto These Hills - A Retelling," written by Pat Allee and Ben Hurst, a duo described to me as "veteran Hollywood writers." A Google search found that most of their credits are from TV cartoons, including "Sonic the Hedgehog."

Maybe the folks in Cherokee know what they are doing. After all, it's a tourist town. Commerce rules. If you don't give the people what they want, they can always go down the street to the souvenir shops and watch the feathered Indians do a war dance in front of a sheet-metal teepee.

"Unto These Hills - A Retelling" mostly commits the sin of being dull.

Personally, though, I would rather have watched "Sonic the Hedgehog."

So, thanks to Mr. Mason, it looks like I don't have a monopoly on snark.

It has been many moons since all this tinkering with the drama.  Maybe I'll get back there this year to see the current version of "Unto These Hills."  I can't imagine it hanging on for much longer, though, 21st century being what it is.


Thankfully, the great Werner Herzog did some filming in Cherokee back in the '70s.

Enough of this digression.  There IS a better story to be told and I'm trying to find it.  With a return to the old texts and the help of some new scholarship, the picture is emerging.  The story of native people in the Southern Appalachians and the rest of the Southeast is much more complicated - and much more interesting - than anything a tourist will encounter in Cherokee, with the possible exception of piano-playing chickens.

Maybe the next revision of the outdoor drama will feature an all-poultry cast.  Now that's entertainment!

"Unto These Hens," anyone?