Charles Lanman (1819-1895) was an American Renaissance Man.  The Michigan native was a librarian, scholar, ambassador, angler, explorer and travel writer. Participating in the Hudson River School for an entire decade, Lanman was also a talented painter who studied under the great Asher Durand. 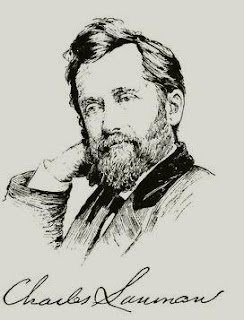 Lanman’s Letters from the Alleghany Mountains (1849) is, arguably, the most picturesque eyewitness account of Southern Appalachian life in the antebellum period.  I read it thirty years ago and have returned to it often.

Digging a bit deeper into his extensive literary output, I recently discovered a piece that he described as an origin story of the Catawba Indians, among numerous other Indian tales in his 1857 book, Adventures in the Wilds of the United States and British American Provinces.

In the eighteenth century, the Catawbas were a prominent native group in the Carolina Piedmont and were also perpetual adversaries of the Cherokees.  Their culture has survived, not quite intact, to the present day. Last year, I posted an entry on one man who was (ostensibly) the last speaker of the Catawba language.

To what extent Lanman was personally acquainted with Catawba people in the 1840s and 1850s is an open question, as is the degree to which he relied on his own imagination to recount the Catawba Genesis legend:

THERE was a time when the world was an unbroken waste of rocks, hills, and mountains, save only one small valley, which was distinguished for its luxuriance, and where reigned a perpetual summer. At that time, too, the only human being who inhabited the earth was a woman, whose knowledge was confined to this valley, and who is remembered among the Catawbas as the mother of mankind.

She lived in a cavern, and her food consisted of the honey of flowers, and the sweet berries and other fruits of the wilderness. Birds without number, and the wild streams which found a resting-place in the valley, made the only music which she ever heard. Among the wild animals, which were very numerous about her home, she wandered without any danger; but the beaver and the doe were her favorite companions.

In personal appearance she was eminently beautiful, and the lapse of years only had a tendency to increase the brightness of her eyes and the grace of her movements. The dress she wore was made of those bright green leaves which enfold the water lilies, and her hair was as long as the grass which fringed the waters of her native vale. She was the ruling spirit of a perennial world, for even the very flowers which bloomed about her sylvan home were never known to wither or die. In spite of her lonely condition, she knew not what it was to be lonely; but ever and anon a strange desire found its way to her heart, which impelled her to explore the wild country which surrounded her home.

For many days had she resisted the temptation to become a wanderer from her charming valley, until it so happened, on a certain morning, that a scarlet butterfly made its appearance before the door of her cave, and by the hum of its wings invited her away. She obeyed the summons, and followed the butterfly far up a rocky ravine, until she came to the foot of a huge waterfall, when she was deserted by her mysterious pilot, and first became acquainted with the emotion of fear.

Her passage of the ravine had been comparatively smooth; but when she endeavored, in her consternation, to retrace her steps, she found her efforts unavailing, and fell to the ground in despair. A deep sleep then overcame her senses, from which she was not awakened until the night was far spent; and then the dampness of the dew had fallen upon her soft limbs, and for the first time in her life did she feel the pang of a bodily pain.

Forlorn and desolate indeed was her condition, and she felt that some great event was about to happen, when, as she uncovered her face and turned it to the sky, she beheld, bending over her prostrate form, and clothed in a cloud-like robe, the image of a being somewhat resembling herself, only that he was more stoutly made, and of a much fiercer aspect. Her first emotion at this strange discovery was that of terror; but as the mysterious being looked upon her in kindness, and raised her lovingly from the ground, she confided in his protection, and listened to his words until the break of day.

He told her that he was a native of the far-off sky, and that he had discovered her in her forlorn condition while travelling from the evening to the morning star. He told her also that he had never before seen a being so soft and beautifully formed as she. In coming to her rescue he had broken a command of the Great Spirit, or the Master of Life, and, as he was afraid to return to the sky, he desired to spend his days in her society upon earth. With joy did she accept this proposal; and, as the sun rose above the distant mountains, the twain returned in safety to the luxuriant vale, where, as man and woman, for many moons, they lived and loved in perfect tranquility and joy.

In process of time the woman became a mother; from which time the happiness of the twain became more intense, but they at the same time endured more troubles than they had ever known before. The man was unhappy because he had offended the Master of Life, and the mother was anxious about the comfort and happiness of her newly-born child. Many and devout were the prayers they offered the Great Spirit for his guidance and protection, for they felt that from them were to be descended a race of beings more numerous than the stars of heaven.

The Great Spirit had compassion on these lone inhabitants of the earth; and, in answer to their prayers, he caused a mighty wind to pass over the world, making the mountains crowd closely together, and rendering the world more useful and beautiful by the prairies and valleys and rivers which now cover it, from the rising to the setting sun. The Master of Life also told his children that he would give them the earth and all that it contained as their inheritance; but that they should never enjoy their food without labor, should be annually exposed to a season of bitter cold, and that their existence should be limited by that period of time when their heads should become as white as the plumage of the swan. And so endeth the words of the Catawba. 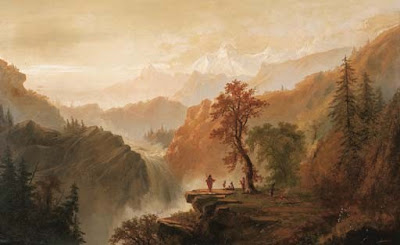 One of Charles Lanman's paintings

In 1848, Lanman spent some time exploring Roan Mountain, on the Tennessee – North Carolina border and he credited the Catawbas with an explanation for the rhododendron balds of that region:

In accounting for the baldness which characterizes the Roan Mountain, the Catawba Indians relate the following tradition:

There was once a time when all the nations of the earth were at war with the Catawbas, and had proclaimed their determination to conquer and possess their country.

On hearing this intelligence the Catawbas became greatly enraged, and sent a challenge to all their enemies, and dared them to a fight on the summit of the Roan. The challenge was accepted, and no less than three famous battles were fought—the streams of the entire land were red with blood, a number of tribes became extinct, and the Catawbas carried the day.

Whereupon it was that the Great Spirit caused the forests to wither from the three peaks of the Roan Mountain where the battles were fought; and wherefore it is that the flowers which grow upon this mountain are chiefly of a crimson hue, for they are nourished by the blood of the slain.