Thimbleweed and its Neighbors

"Dwell on the beauty of life. Watch the stars, and see yourself running with them."
- Marcus Aurelius, Meditations

"The power of finding beauty in the humblest things makes home happy and life lovely."
-Louisa May Alcott

It isn't rare for me to encounter an unfamiliar wildflower.   But after a decade of native plant study, it is a pleasant surprise when I find a showy specimen that is new to me. 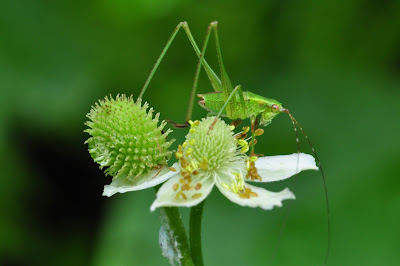 Such has been the case this summer with the Thimbleweed or Tall anemone (Anemone virginiana).  I found some just outside my back door and all over this mountain. How I might have missed it in the past is beyond me (assuming it has grown here in prior years), since the plant is a couple of feet tall.

When I began searching for specimens to photograph, a tiny grasshopper obliged. 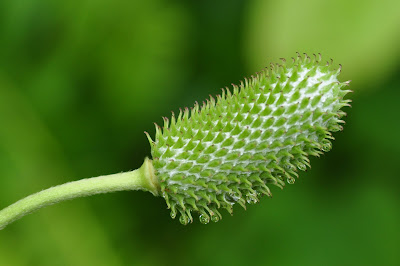 Anemone virginiana is a distinctive mid-to-late summer flower with a  whitish-green bloom (what appear to be petals are actually sepals) and an oblong spiny fruit that remains after the petal-like sepals drop.

As with other members of the buttercup family, it produces the allelopathic substance, protoanemonin.  I've seen this described as a mild toxin that can cause skin or gastrointestinal irritation, and also as something that inhibits seed germination and seedling growth in many species of plants that might compete with it.  In any event, the plant's chemical defense mechanisms don't seem to discourage an occasional grasshopper. 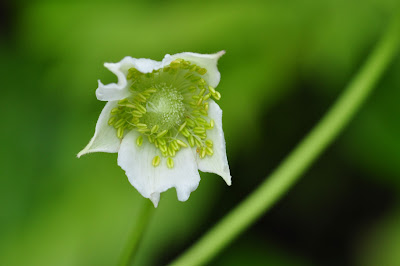 A world of great beauty is so close at hand but so easily overlooked.

Just a few feet away from the Tall anemone, I've had a stand of Purple coneflower (Echinacea purpurea) that never fails to amaze. 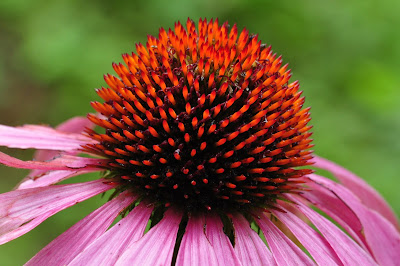 "When you take a flower in your hand and really look at it, it's your world for the moment. I want to give that world to someone else.  Most people in the city rush around so, they have no time to look at a flower.  I want them to see it whether they want to or not."

On the other hand, Ms. O'Keefe is also reported to have said:

"I hate flowers - I paint them because they're cheaper than models and they don't move!" 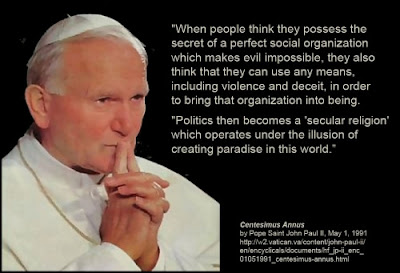 Why Progressivism and Religion Don’t Go Together -  Leftists want government to do the work of God — transform human beings into perfect creatures.

Anyone watching the Democratic leaders in the months since Donald Trump was elected president will likely agree: The party is in nearly complete disarray. There is less consensus, however, about exactly why Democrats are having such a difficult time defining themselves in the post-Trump electoral landscape....

Some have suggested that the party’s top leadership is the main issue, and Democratic politicians in the House have begun openly grumbling against minority leader Nancy Pelosi. Others on the Left believe that Democratic candidates have been losing because they’ve stayed too close to the center, rather than endorsing the increasingly progressive policies some voters desire. Still others have posited that the underlying issue is the party’s dismissive attitude toward religious values and even organized religion itself.

While the problems afflicting the party must stem from some combination of these factors, Democrats’ scorn for religion should be their biggest concern. That scorn is compounded by the party’s sudden and dramatic swerve to the Left on key social issues — abortion, contraception, religious liberty, and marriage, to name a few — in a quest for votes from far-Left, progressive Americans.

Just after the election in Georgia, historian Daniel Williams wrote an opinion piece in the New York Times titled “The Democrats’ Religion Problem.” In it, he suggested that Bernie Sanders’s presidential campaign might offer the party a way of reaching religious Americans. He writes:

Mr. Sanders’s non-Christian background may have hurt him in the South; he did poorly among African-American voters, despite his consistent civil rights record. But he did what few other secular candidates have done: He won a sympathetic hearing from conservative evangelicals with a speech that gave a religious grounding for his economic views, complete with biblical citations. When Mr. Sanders spoke at Liberty University, he did not pretend to share evangelical Christians’ faith, but he showed respect for his audience’s religious tradition.

Williams concluded by arguing that Democratic politicians must convince religious voters that they are not enemies of faith, and they ought to do so by “grounding their policy proposals in the religious values of prospective voters.”

This week, in a New York Times column, Annette Gordon-Reed and Peter Onuf offered an alternative model. The co-authors suggested that Thomas Jefferson’s unique attitude toward religion — which pervaded his contributions to the nation’s founding and early government — could serve as a model for today’s Democrats, especially Jefferson’s vigorous embrace of civil religion and peaceful pluralism.

These debates may provide Democrats a method of attaining electoral success, perhaps even in the near future. But while each suggestion hints at a way of combating negative public perception, neither of these models can eliminate the underlying obstacle: progressivism’s inherent contradiction of religion.

Progressivism has always been premised on the notion that man has a changeable nature and thus is able to achieve perfection during his time on earth. As a result, progressives consistently maintain that government is responsible for transforming men and women into perfect creatures. They develop programs and reforms suited not for man as he is, but for man as he ought to be (and, progressives would argue, for man as he could become, with the right societal structures).

Against that idea, most religious believers contend that man is flawed by his very nature and incapable of perfecting himself without the help of God, and that perfection is in fact unattainable during earthly life. While sects and denominations differ vastly, religion itself — and indeed any dependence on a Creator — is a direct contradiction to the progressive conception of man as changeable and perfectible.

In short, progressivism and religion — understood as a fundamental reliance on God rather than on oneself or on other men — are inherently incompatible. Where progressivism asserts that properly ordered government can and should transform man into a perfect being who lives in a man-made utopia, religion insists that God, not government, is responsible for changing men’s hearts.

To be sure, many religious Americans believe that progressive social programs are helping to carry out God’s work — caring for the world’s poor and needy. But that underlying contradiction remains a stumbling block for many faithful voters, especially when seen in conjunction with Democrats’ increasing repudiation of traditional values. Unless Democratic politicians understand and address those legitimate concerns, they won’t sway those who reject the notion that government should take the place of God.

— Alexandra DeSanctis is a William F. Buckley Fellow in Political Journalism at the National Review Institute

Posted by GULAHIYI at 9:40 PM No comments: