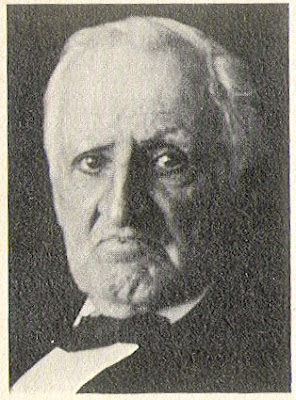 The ethnologist Cyrus Thomas (1825-1910) had a particular interest in mound building and discredited the prevailing theory of his time, that mounds were constructed by a race that prececded the Indians.  His Catalogue of Prehistoric Works East of the Rocky Mountains,  (1891) is a lengthy list of mounds, earthworks, petroglyphs, kjokkenmodding, and various aboriginal stone constructions.

After studying the Catalogue, I pared down the list, limiting the geographic coverage to North Georgia, Western North Carolina, Northwestern South Carolina and East Tennessee.   Further, I’ve removed listings for almost all the mounds within that territory.  My specific interest at the moment involves rock cairns, stone walls and similar stone structures.

A later post will discuss some of these, particularly the abundance of sites identified in Habersham County and the rest of North Georgia.  But for now, here’s an abridged list from Cyrus Thomas’ Catalogue:

"Indian Fort," or inclosure on the summit of a rocky hill which overlooks the Etowah River towards Rome, 2 1/2 miles northwest of the great Etowah Mounds. Figure and description by Charles Whittlesey, Smithsonian Report, 1881, pp. 627,628. Described also in the Atlanta Constitution, April 13, 1886.

A mound encircled by a stone wall, at Adairsville. Reported by James D. Middleton.

Remains of a rock wall about half way up Stone Mountain. Described by C. C. Jones, Antiquities of the Southern Indians., pp. 207-208.

Stone cairn on road from Campbellton to Marietta, on ridge between Anawaka and Sweetwater Creeks. Reported by James Mooney.

Ancient fortifications on the western bank of the Chattahoochee River opposite the village of Campbellton. Mentioned in White's Historical Collections of Georgia, p. 293.

Stone cairn on a hill near the preceding.

Stone inclosure with walls about 3 1/2 feet high, area one-fourth of an acre, formerly on west side of
Silver Creek, 7 1/2miles south of Rome.  Reported by James Mooney.

Stone mound on the form of Robert M. Grimes, near the southeast line of the county; also an earth mound to the west of the stone mound. Mentioned by Benj. W. Kent. Sm. Rep., 1882, p. 771.

Circular earthwork about 30 feet in diameter, just east of last.

Stone cairn on a ridge between Rabun and Habersham Counties, 2 miles west of Tallulah Falls.

Large mound on east side of Soquee River, 1 mile above Deep Creek.

Stone wall nearly obliterated, on the east bank of Soquee River, about 4 miles above Clarkesville.

Stone cairn on north side of Toccoa Creek, 4 miles above its month.

Mound on the east bank of Soquee River, one-half mile above Clarkesville on the Wilson farm.

Stone cairn on the Ryan farm, 1 mile northeast of Clarkesville.

Stone cairns on the road, 1 mile north of Soquee post-office.

Stone cairn on the west bank of Soquee River, 2 miles below Clarkesville.

Stone mound on a ridge 3 miles from Sparta, in a direction opposite to the circular work mentioned in the next item.  Mentioned by C. C. Jones, Antiq. So. Inds., p. 148.

Circular earthwork on the headwaters of the Great Ogeechee River, 5 miles from Sparta.  Brief description by C. C. Jones, Antiq. So. lnds., p. 148.

Large stone and earthen circular work, walls formerly 12 feet high and inclosing an area of 8 or 10 acres, on Fort Mountain.

Bird-shaped mound of white quartz rock, inclosed by a stone circle, about 1 1/2 miles from Lawrence's ferry on the Oconee River.

Stone cairns on the north side of Tuckaleegee Creek, a small branch of War Woman Creek.

Wall of large, dressed, uncemented stones, at Smith's Gold Mine, on the north side of Dick's Creek, 1 1/2 miles west of Burton post-office.  Discovered by gold washers.

Stone cairn, known as the ''Indian Grave," near Glassy Mountain, on the head of Tiger Creek.

Stone cairn on the ridge east of Tiger Creek and southeast of Glassy Mountain.  Reported by James Mooney.

Mound on east side of Sautee Creek, 1 mile above Chickamauga Creek.  Reported by James Mooney.

Ancient remains consisting of inclosures, mounds, and excavations, some miles above Wrightsborough, on the north side of Little River.  Mentioned by Bartram, Travels, pp. 37,38; C. C. Jones, Antiq. So. Inds., p. 123.

Cairn at Indian Grave Gap on Green Mountain, 4 1/2 miles due north of Lenoir, in the trail. No burial.

Cairn on Brushy Mountain, near a probable Indian trail, 1 1/2 miles north of Cedar Valley. No burial.

Cairn 6 1/2 miles southwest of Lenoir, between Lenoir and Icard Station (on Richmond and Danville road, above Hickory). No burial.

Cairn on Brushy Mountain, about three-fourths of a mile east of the one noted above. No burial.

Group of small cairns on the ridge west of John's River, extending for about a mile along the ridge, from 5 to 6 miles northwest of Collettsville. Unexplored.  Reported by J. M. Spainhour.

Numerous stone cairns along trail down south side of Chilhowee and Tennessee Rivers, extending about 6 miles from Santeetleh Creek into Tennessee.

Stone graves 3 miles below Robbinsville on a ridge near Chilhowee River.  Reported by J. W. Emmert.

Stone cairns (six) on southwest side of Cullasaja Creek nearly opposite mouth of Ellijay Creek.

Mound on west bank of Nantahela River, 2 miles below Jarretts.

Mound on east bank of Nantahela River opposite mouth of Cowe Creek.

Stone cairns on Cartooyaja Creek near mouth of Wayah Creek, about 7 miles west of Franklin.

Cairn at Indian Grave Gap, in Walnut Mountain, at head of Brush and Walnut Creeks, on south side of road from Marshall to Burnsville. Reported by James Mooney.

Stone cairn on ridge between Indian Creek and Cooper's Creek, about 3 miles northeast of Bryson City.

Cemetery on the southeast bank of Ellejoy Creek, just below old Fort McTeer and about 7 miles east of Maryville. Reported by J. W. Enmert.

Two cairns at the lower end of Chilhowee Mountain, about 2 miles northeast of Chilhowee post-office, and on the west side of the road in Montvale Springs.  Reported by J. W. Emmert.

Twenty-five cairns 4 miles southeast of Indian Grave Gap, mentioned above, on the west side of the same road.  Described by Dunning and quoted by Cyrus Thomas as above.

Cairns on both sides of the trail from Wear's Cove (on Cove Creek in Sevier County) to Tuckaleechee Cove (at Bricky Branch in Blonnt County) on the county line and extending into Sevier County.  Reported by James Mooney.

Several cairns at Indian Grave Gap, where the road crosses north of Watauga River and about 1 mile north of Elizabethton.

"Chimneys," ten or fifteen in number, like stone chimneys open at the top, washed out about 1882 in bottom on west bank of Tennessee (Holston) River just below the mouth of the French Broad.  Reported by James Mooney.

Cairns in the gap on the State line at the Slick Rock trail on the south side of the Little Tennessee River.

Stone graves (cists) about one hundred in number on Slick Rock Creek on the south side of Little Tennessee River.

Several stone graves on the east side of Citico Creek 5 miles from Little Tennessee River at Good Fields.

Three stone graves on a bluff on the north bank of Holston River 4 miles southeast of Kingsport.

Three stone graves similar to the above on the north bank of the Holston 2 miles higher up. Explored and described by J. W. Emmert in Report.

Mound containing stone graves about 2 miles directly nortb of Kingsport and not far from the North Fork of Holston.  Reported by Cyrus Thomas. Described and illustrated in Burial Mounds of the Northern Section, pp. 75-77.

Cairns on the south side of the South Fork of Holston River 1/4 of a mile above Sharp's Creek, near Minnick's Ford.

Two stone graves on a bluff on the north side of the South Port of Holston River at Minnick's Ford. Reported by J. W. Emmert.

Grave cairns at Indian Grave Gap on the top of the Unaka Mountains on the State line about 4 miles southeast of Erwin.

Cairns on the south side of Watauga River, 1 mile above Roan's Creek.  Reported by James Mooney.