From "The Naked Public Square" 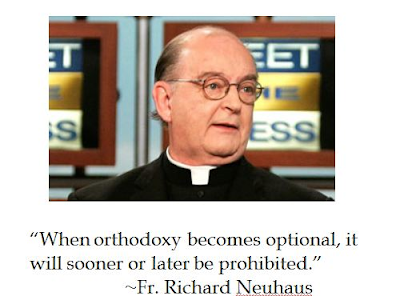 In a democratic society, presumably, the public business is carried on in conversation with the actual values of people who are the society. In a survey of North Carolinians in the 1970s, seventy-four percent agree with the statement: "Human rights come from God and not merely from laws." . . . North Carolinians may be more "traditional" than other Americans on these scores, although there is no reason to assume that. One suspects, rather, that there is among Americans a deep and widespread uneasiness about the denial of the obvious. The obvious is that, in some significant sense, this is, as the Supreme Court said in 1931, a Christian people. The popular intuition is that this fact ought, somehow, to make a difference. It is not an embarrassment to be denied or disguised. It is an inescapable part of what Bickel calls the "tradition of our society and of kindred societies that have gone before." Not only is it tradition in the sense of historic past; it is demonstrably the present source of moral vitalities by which we measure our virtues and hypocrisies.


The notion that this is a secular society is relatively new. . . . In a democratic society, state and society must draw from the same moral well. In addition, because transcendence abhors a vacuum, the state that styles itself as secular will almost certainly succumb to secularism. Because government cannot help but make moral judgments of an ultimate nature, it must, if it has in principle excluded identifiable religion, make those judgments by "secular" reasoning that is given the force of religion. . . .

More than that, the notion of the secular state can become the prelude to totalitarianism. That is, once religion is reduced to nothing more than privatized conscience, the public square has only two actors in it--the state and the individual. Religion as a mediating structure--a community that generates and transmits moral values--is no longer available as a countervailing force to the ambitions of the state. . . .

In recent decades, "pluralism" has become something of a buzzword. It is variously employed. Often it is used to argue that no normative ethic, even of the vaguest and most tentative sort, can be "imposed" in our public life. In practice this means that public policy decisions reflect a surrender of the normal to the abnormal, of the dominant to the deviant. Indeed it is of more than passing interest that terms such as abnormal or deviant have been largely exorcised from polite vocabulary among the elites in American life. The displacement of the constitutive by the marginal is not so much the result of perverse decision makers as it is the inevitable consequence of a polity and legal system in which the advantage of initiative lies with the offended....

The legitimacy of law in a democratic society depends upon the popular recognition of the connections between law and what people think life is and ought to be....