C. S. Lewis died on this date 55 years ago, a transition overshadowed by another death on that same day. 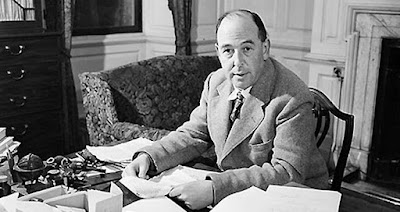 The following passage by Lewis is from the chapter "Social Morality" in Mere Christianity (1952).

All the same, the New Testament, without going into details, gives us a pretty clear hint of what a fully Christian society would be like. Perhaps it gives us more than we can take. It tells us that there are to be no passengers or parasites: if man does not work, he ought not to eat. Everyone is to work with his own hands, and what is more, every one's work is to produce something good: there will be no manufacture of silly luxuries and then of sillier advertisements to persuade us to buy them. And there is to be no "swank" or "side," no putting on airs. To that extent a Christian society would be what we now call Leftist. On the other hand, it is always insisting on obedience -- obedience (and outward marks of respect) from all of us to properly appointed magistrates, from children to parents, and (I am afraid this is going to be very unpopular) from wives to husbands. Thirdly, it is to be a cheerful society: full of singing and rejoicing, and regarding worry or anxiety as wrong. Courtesy is one of the Christian virtues; and the New Testament hates what it calls "busybodies."

If there were such a society in existence and you or I visited it, I think we should come away with a curious impression. We should feel that its economic life was very socialistic and, in that sense, "advanced," but that its family life and its code of manners were rather old-fashioned -- perhaps even ceremonious and aristocratic. Each of us would like some bits of it, but I am afraid very few of us would like the whole thing. That is just what you would expect if Christianity is the total plan for the human machine. We have all departed from that total plan in different ways, and each of us wants to make out that his own modification of the original plan is the plan itself. You will find this again and again about anything that is really Christian: Everyone is attracted by bits of it and wants to pick out those bits and leave the rest. That is why we do not get much further: and that is why people who are fighting for quite opposite things can say they are fighting for Christianity.