On the God Within Us

At approximately the same time Saint Paul was writing the epistles that would appear in the New Testament, the Roman philosopher of stoicism, Seneca the Younger, was completing “Moral Epistles to Lucilius.”  Brief mention is made in the book of Acts about a meeting in Athens between Paul and Stoic philosophers  - see Acts 17:16-34.  (Up until the Renaissance, a collection of correspondence between Paul and Seneca was thought to be genuine, but it turned out to be a forgery.)

For the Stoics, the path to happiness is found in accepting the moment as it presents itself, by not allowing oneself to be controlled by the desire for pleasure or fear of pain, by using one's mind to understand the world and to do one's part in nature's plan, and by working together and treating others fairly and justly.  Some tenets of the philosophy reverberate in Christian ethical teachings, but overall are more at consistent with today’s New Age movement.  The following passage is from Seneca’s epistle, “On the God Within Us:”

We do not need to uplift our hands towards heaven, or to beg the keeper of a temple to let us approach his idol's ear, as if in this way our prayers were more likely to be heard. God is near you, he is with you, he is within you. 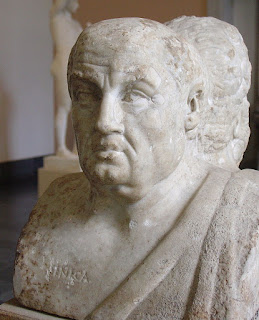 2. This is what I mean, Lucilius: a holy spirit indwells within us, one who marks our good and bad deeds, and is our guardian. As we treat this spirit, so are we treated by it. Indeed, no man can be good without the help of God. Can one rise superior to fortune unless God helps him to rise? He it is that gives noble and upright counsel. In each good man, “A god doth dwell, but what god know we not.”

3. If ever you have come upon a grove that is full of ancient trees which have grown to an unusual height, shutting out a view of the sky by a veil of pleached and intertwining branches, then the loftiness of the forest, the seclusion of the spot, and your marvel at the thick unbroken shade in the midst of the open spaces, will prove to you the presence of deity. Or if a cave, made by the deep crumbling of the rocks, holds up a mountain on its arch, a place not built with hands but hollowed out into such spaciousness by natural causes, your soul will be deeply moved by a certain intimation of the existence of God. We worship the sources of mighty rivers; we erect altars at places where great streams burst suddenly from hidden sources; we adore springs of hot water as divine, and consecrate certain pools because of their dark waters or their immeasurable depth.

4. If you see a man who is unterrified in the midst of dangers, untouched by desires, happy in adversity, peaceful amid the storm, who looks down upon men from a higher plane, and views the gods on a footing of equality, will not a feeling of reverence for him steal over you, will you not say: "This quality is too great and too lofty to be regarded as resembling this petty body in which it dwells? A divine power has descended upon that man."

5. When a soul rises superior to other souls, when it is under control, when it passes through every experience as if it were of small account, when it smiles at our fears and at our prayers, it is stirred by a force from heaven. A thing like this cannot stand upright unless it be propped by the divine. Therefore, a greater part of it abides in that place from whence it came down to earth. Just as the rays of the sun do indeed touch the earth, but still abide at the source from which they are sent; even so the great and hallowed soul, which has come down in order that we may have a nearer knowledge of divinity, does indeed associate with us, but still cleaves to its origin; on that source it depends, thither it turns its gaze and strives to go, and it concerns itself with our doings only as a being superior to ourselves.

6. What, then, is such a soul? One which is resplendent with no external good, but only with its own. For what is more foolish than to praise in a man the qualities which come from without? And what is more insane than to marvel at characteristics which may at the next instant be passed on to someone else? A golden bit does not make a better horse. The lion with gilded mane, in process of being trained and forced by weariness to endure the decoration, is sent into the arena in quite a different way from the wild lion whose spirit is unbroken; the latter, indeed, bold in his attack, as nature wished him to be, impressive because of his wild appearance, – and it is his glory that none can look upon him without fear, – is favoured in preference to the other lion, that languid and gilded brute.

7. No man ought to glory except in that which is his own. We praise a vine if it makes the shoots teem with increase, if by its weight it bends to the ground the very poles which hold its fruit; would any man prefer to this vine one from which golden grapes and golden leaves hang down? In a vine the virtue peculiarly its own is fertility; in man also we should praise that which is his own. Suppose that he has a retinue of comely slaves and a beautiful house, that his farm is large and large his income; none of these things is in the man himself; they are all on the outside.

8. Praise the quality in him which cannot be given or snatched away, that which is the peculiar property of the man. Do you ask what this is? It is soul, and reason brought to perfection in the soul. For man is a reasoning animal. Therefore, man's highest good is attained, if he has fulfilled the good for which nature designed him at birth. 9. And what is it which this reason demands of him? The easiest thing in the world, – to live in accordance with his own nature. But this is turned into a hard task by the general madness of mankind; we push one another into vice. And how can a man be recalled to salvation, when he has none to restrain him, and all mankind to urge him on? Farewell.