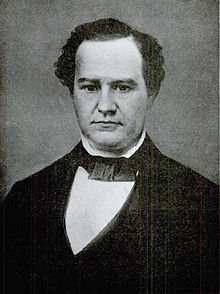 'Tis midnight's holy hour, and silence now
Is brooding like a gentle spirit o'er
The still and pulseless world. Hark! on the winds
The bell's deep tones are swelling,—'tis the knell
Of the departed year.

No funeral train
Is sweeping past; yet on the stream and wood,
With melancholy light, the moonbeams rest
Like a pale, spotless shroud; the air is stirred,
As by a mourner's sigh; and on yon cloud
That floats so still and placidly through heaven,
The spirits of the seasons seem to stand—
Young Spring, bright Summer, Autumn's solemn form,
And Winter with his aged locks—and breathe,
In mournful cadences that come abroad
Like the far wind-harp's wild and touching wail,
A melancholy dirge o'er the dead year,
Gone from the earth forever.

'Tis a time
For memory and for tears. Within the deep,
Still chambers of the heart a specter dim,
Whose tones are like the wizard voice of Time,
Heard from the tomb of ages, points its cold
And solemn finger to the beautiful
And holy visions that have passed away,
And left no shadow of their loveliness
On the dead waste of life. That specter lifts
The coffin lid of Hope, and Joy, and Love,
And, bending mournfully above the pale,
Sweet forms that slumber there, scatters dead flowers
O'er what has passed to nothingness.

The year
Has gone, and with it many a glorious throng
Of happy dreams. Its mark is on each brow,
Its shadow in each heart. In its swift course
It waved its scepter o'er the beautiful,—
And they are not. It laid its pallid hand
Upon the strong man,—and the haughty form
Is fallen, and the flashing eye is dim.
It trod the hall of revelry, where thronged
The bright and joyous, and the tearful wail
Of stricken ones is heard, where erst the song
And reckless shout resounded. It passed o'er
The battle plain, where sword, and spear, and shield
Flashed in the light of midday—and the strength
Of serried hosts is shivered, and the grass,
Green from the soil of carnage, waves above
The crushed and mouldering skeleton. It came
And faded like a wreath of mist at eve;
Yet, ere it melted in the viewless air,
It heralded its millions to their home
In the dim land of dreams.

Remorseless Time!
Fierce spirit of the glass and scythe!—what power
Can stay him in his silent course, or melt
His iron heart to pity? On, still on
He presses, and forever. The proud bird,
The condor of the Andes, that can soar
Through heaven's unfathomable depths, or brave
The fury of the northern hurricane,
And bathe his plumage in the thunder's home,
Furls his broad wings at nightfall and sinks down
To rest upon his mountain crag—but Time
Knows not the weight of sleep or weariness,
And night's deep darkness has no chain to bind
His rushing pinions. Revolutions sweep
O'er earth, like troubled visions o'er the breast
Of dreaming sorrow,—cities rise and sink
Like bubbles on the water,—fiery isles
Spring blazing from the ocean, and go back
To their mysterious caverns,—mountains rear
To heaven their bald and blackened cliffs, and bow
Their tall heads to the plain,—new empires rise,
Gathering the strength of hoary centuries,
And rush down like the Alpine avalanche,
Startling the nations,—and the very stars,
Yon bright and burning blazonry of God,
Glitter a while in their eternal depths,
And, like the Pleiad, loveliest of their train,
Shoot from their glorious spheres, and pass away
To darkle in the trackless void,—yet Time,
Time, the tomb-builder, holds his fierce career,
Dark, stern, all-pitiless, and pauses not
Amid the mighty wrecks that strew his path
To sit and muse, like other conquerors,
Upon the fearful ruin he has wrought.