Slaving Over a Hot Oven, Literally

Socrates of Constantinople (ca. AD 380 – ca. 439) was a 5th-century Christian church historian, author of a Historia Ecclesiastica which covers the history of late ancient Christianity during the years 305 to 439.  His history picked up where Eusebius left off.  The book yields some perspectives on everyday life in the latter years of the Roman Empire, one example being this account of the “clever” means of acquiring workers for the bakeries:

Chapter 18. Reformation of Abuses at Rome by the Emperor Theodosius.

The emperor Theodosius during his short stay in Italy, conferred the greatest benefit on the city of Rome, by grants on the one hand, and abrogations on the other. His largesses were indeed very munificent; and he removed two most infamous abuses which existed in the city. One of them was the following: there were buildings of immense magnitude, erected in ancient Rome in former times, in which bread was made for distribution among the people. 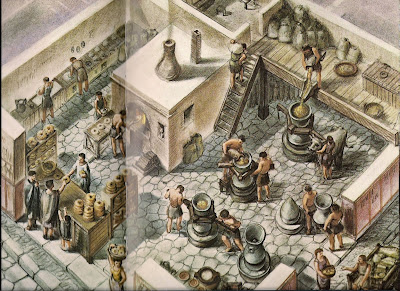 Those who had the charge of these edifices, who Mancipes* were called in the Latin language, in process of time converted them into receptacles for thieves. Now as the bake-houses in these structures were placed underneath, they build taverns at the side of each, where they kept prostitutes; by which means they entrapped many of those who went there either for the sake of refreshment, or to gratify their lusts, for by a certain mechanical contrivance they precipitated them from the tavern into the bake-house below.

This was practiced chiefly upon strangers; and such as were in this way kidnapped were compelled to work in the bake-houses, where many of them were immured until old age, not being allowed to go out, and giving the impression to their friends that they were dead. It happened that one of the soldiers of the emperor Theodosius fell into this snare; who being shut up in the bake-house, and hindered from going out, drew a dagger which he wore and killed those who stood in his way: the rest being terrified, suffered him to escape.

When the emperor was made acquainted with the circumstance he punished the Mancipes, and ordered these haunts of lawless and abandoned characters to be pulled down. This was one of the disgraceful nuisances of which the emperor purged the imperial city: the other was of this nature. When a woman was detected in adultery, they punished the delinquent not in the way of correction but rather of aggravation of her crime. For shutting her up in a narrow brothel, they obliged her to prostitute herself in a most disgusting manner; causing little bells to be rung at the time of the unclean deed that those who passed might not be ignorant of what was doing within. This was doubtless intended to brand the crime with greater ignominy in public opinion.

As soon as the emperor was apprised of this indecent usage, he would by no means tolerate it; but having ordered the Sistra — for so these places of penal prostitution were denominated — to be pulled down, he appointed other laws for the punishment of adulteresses. Thus did the emperor Theodosius free the city from two of its most discreditable abuses: and when he had arranged all other affairs to his satisfaction, he left the emperor Valentinian at Rome, and returned himself with his son Honorius to Constantinople, and entered that city of the 10th of November, in the consulate of Tatian and Symmachus.

*The word rendered “Mancipes” in this passage obviously refers to slave-holders, derived from the Latin noun “mancipium” referring to “slave” or “possession” hence the English word “emancipation” meaning “liberation from slavery.”