Narrative of the adventures of Captain Isaac Stewart [from South Carolina], taken from his own mouth in March 1782.

I was taken prisoner about fifty miles to the westward of Fort Pitt [present-day Pittsburgh], about eighteen years ago, by the Indians, and was carried by them to the Wabash, with many more white men, who were executed with circumstances of horrid barbarity; it was my good fortune to call forth the sympathy of Rose, called the good woman of the town, who was permitted to redeem me from the flames, by giving, as my ransom, a horse. 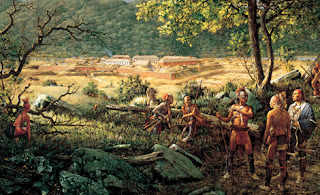 After remaining two years in bondage amongst the Indians, a Spaniard came to the nation, having been sent from Mexico on discoveries. He made application to the chiefs for redeeming me and another white man in the like situation, a native of Wales, named John Davey; which they complied with, and we took our departure in company with the Spaniard, and travelled to the westward, crossing the Mississippi near la Riviere Rouge, or Red River, up which we travelled seven hundred miles, when we came to a nation of Indians remarkably white, and whose hair was of a reddish colour, at least mostly so; they lived on the bank of a small river that empties itself into the Red River, which is called the River Post.

In the morning of the day after our arrival amongst these Indians, the Welchman informed me, that he was determined to remain with them, giving as a reason that he understood their language, it being very little different from the Welch. My curiosity was excited very much by this information, and I went with my companion to the chief men of the town, who informed him (in a language I had no knowledge of, and which had no afiinity to that of any other Indian tongue I ever heard) that their forefathers of this nation came from a foreign country, and landed on the east side of the Mississippi, describing particularly the country now called West Florida, and that on the Spaniards taking possession of Mexico, they fled to their then abode; and as a proof of the truth of what he advanced, he brought forth rolls of parchment, which were carefully tied up in otter skins, on which were large characters, written with blue ink; the characters I did not understand, and the Welchman being unacquainted with letters, even of his own language, I was not able to know the meaning of the writing.

They are a bold, hardy, intrepid people, very warlike, and the women beautiful, when compared with other Indians.  We left this nation, after being kindly treated and requested to remain among them, being only two in number, the Spaniard and myself, and we continued our course up the waters of the Red River, till we came to-a nation of Indians, called Windots, that never had seen a white man before, and who were unacquainted with the use of fire-arms. On our way, we came to a transparent stream, which, to our great surprise, we found to descend into the earth, and, at the foot of a ridge of mountains, disappeared; it was remarkably clear, and, near to it, we found the bones of two animals, of such a size that a man might walk under the ribs, and the teeth were very heavy.

The nation of Indians who had never seen a white man. lived near the source of the Red River, and there the Spaniard discovered, to his great joy, gold dust in the brooks and rivulets; and being informed by the Indians, that a nation lived farther west, who were very rich, and whose arrows were pointed with gold, we set out in the hope of reaching their country, and travelled about five hundred miles, till we came to a ridge of mountains, which we crossed, and from which the streams run due west, and at the foot of the mountains, the Spaniard gave proofs of joy and great satisfaction, having found gold in great abundance. I was not acquainted with the nature of the ore, but I lifted up what he called gold dust from the bottom of the little rivulets issuing from the cavities of the rocks, and it had a yellow cast, and was remarkably heavy; but so much was the Spaniard satisfied, he relinquished his plan of prosecuting his journey, being perfectly convinced that he had found a country full of gold.

On our return he took a different route, and, when we reached the Mississippi, we went in a canoe to the mouth of the Missouri, where we found a Spanish post; there I was discharged by the Spaniard, went to the country of the Chickesaws, from thence to the Cherokees, and soon reached Ninety-six, in South Carolina.