A book by Robert Mills, published in 1826, offers some unusually detailed insights on the native people of the Palmetto State.  Following is a passage from Statistics of South Carolina: Including a View of Its Natural, Civil, and Military History, General and Particular:

The following are the names, location, and number of tribes of Indians in Carolina, about the year 1700, including those that made war in it from a distance; as far as can be ascertained:

THE WESTOES, STONOE, COSAH, SEWEE.
A powerful nation located between Charleston and Edisto river; they were conquered and driven out of the country by the Savannahs. The Stonoe, Cosah and Sewee tribes. 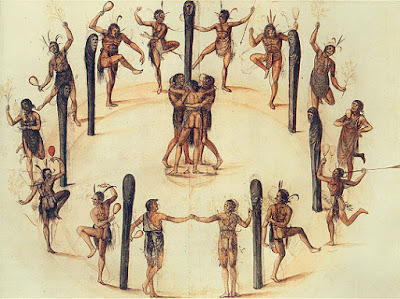 YAMASSEES, HUSPAHS, a tribe.
These possessed a large territory, lying backward from port Royal Island, on the North East side of Savannah river, which to this day is called Indian land. St. Peter's parish includes this country.

APPALACHIANS.
Inhabited the head waters of Savannah and Altamaha rivers ; these gave name to the Apalachian mountains and Appalachicola bay

CREEKS.
This nation occupied the South side of Savannah and Broad rivers: (called in Mowzan's map Cherokee river, which was the dividing line between the Creeks and Cherokees) they invaded the province with other Indians, in 1715.

CONGAREES.
Occupied the country bordering on the river of the same name.

SANTEES, or SERATEES.
Located about Nelson's ferry and Scott's lake, on Santee.

WATEREE, CHICKAREE.
The Wateree Indians were settled below Camden, their town was on Pine-tree Creek.

SALUTAH.
The Salutah Indians were located on and near Saluda river; (now Newberry district ; their chief settlement was the place called Saluda old town.

CATAWBAS, SUGAREE; on Sugar Creek, Lancaster disirict.
Occupied the country above Camden on each side of the river of the same name; a Small remnant of this tribe of Indians still occupies a tract of country, laid off 5 miles square, laying partly in York and partly in Lancaster districts, on both sides of the river.

CHICKASAWS.
This nation occupied the west country, back of the Carolinas, and with the Catawbas assisted the whites against the Cherokees. These towns are now 500 miles due west from Charleston.

The principal tribes who have last resided in or near South Carolina are the Cherokees, Catawbas, Creeks, Chickasaws, and Choctaws.

The Cherokees, till the revolutionary war, continued to inhabit that part of South Carolina which now forms Pendleton and Greenville districts. Having taken part with the British, in that contest, they drew upon themselves the resentment of the state; and were so far subdued by its troops, that they were obliged, by treaty, (executed at DeWitt's corner,) on the 20th May, 1777, to cede, forever, to South Carolina, all their lands eastward of the Unacaye mountains. They now reside beyond these mountains, associated with the middle and upper Cherokees, and are inconsiderable, both in number and force.

Of the twenty-eight nations, which inhabited South Carolina in 1670, twenty-six have entirely disappeared. The Cherokees were permitted, during good behaviour, to reside on the west side of the Oconee mountains, until 1816 when they removed entirely out of the state. The Catawbas alone continue in the state at the present time. The remains of this faithful ally of Carolina occupy an area of country equal to 14,000 acres, situated on each side of the Catawba river, on the borders of North Carolina. At the first settlement of the province this nation mustered 1500 fighting men, at present their warriors do not exceed 50, and the whole nation scarcely 110. These have degenerated from the hardiness of the Indian character ; and are so generally addicted to habits of indolence and intoxication, that they are fast slaking into oblivion.