Fort Mountain, Georgia is an unusual place.  The mountain, and the famous stone “wall” near its summit, are protected by a state park that I visited a couple of years ago. 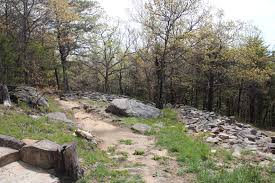 The rugged section of Georgia east of Chatsworth has a spooky feeling to it.  At least it did the afternoon I was there.

To be honest, the 900-foot-long wall did not quite live up to my expectations.  After reading so many myths and legends about the place I had concocted a mental image of something that did not exist.  Instead of a formidable wall of hewn stone, what I found was a meandering line of boulders.

Sometimes it helps not to know too much before reaching a destination.

Here are the transcriptions of two plaques at the park:

Other versions of the Cherokee legend tell about people with fair skin, blond hair, and blue eyes that occupied the mountain areas until Cherokee invaders finally dispersed them. Some tales said the moon-eyed people could see in the dark, but were nearly blind in daylight. Other legends describe them as albinos.

Delaware Indian legend tells of their migration eastward from the far west and meeting a race of very tall, robust, light-skinned people they called the Allegewi, until they prevailed with the support of the Iroquois, who were also moving eastward. Some surviving Allegewi went to Cherokee territory and stayed with them for a time and are remembered as Tlvni Kula, "moon eyed" people, who were tall, fair-skinned, with light hair and grey eyes, and carried strange weapons and tools.

Welsh and Cherokee legends coincide here on Fort Mountain. Welsh legends tell of Prince Madoc, who sailed first to Mobile Bay in 1170 AD. After a brief exploration, Madoc returned to Wales, only to sail again for the New World with numerous settlers in a fleet of ships. They never returned to Wales. In the New World, they built stone forts, including this one on Fort Mountain, and warred with the local Cheyenne before deciding to move west sometime around 1186 AD. Madoc's travels, first told in print about 1584, had been told in Welsh songs and stories since the twelfth century.

In 1782, ninety-year-old Cherokee chief Oconostota told John Seiver of Tennessee about the Welsh who had once "¨.crossed the Great Water and landed first near the mouth of the Alabama River near Mobile¨." Oconostota told that these whites had built the fortifications in this country. Other American legends tell of encounters with indians who possessed pale eyes, red hair, beards, and spoke Welsh.

Legend attributes three stone forts to Prince Madoc's people. One near DeSoto Falls, Alabama, is said to be nearly identical to the setting, layout, and method of construction of Dolwyddelen Castle, the birthplace of Madoc. From Alabama, Madoc moved to this site and hastily constructed these fortifications. Retreating from Fort Mountain, these Welsh settlers built minor fortifications in the Chattanooga area before moving to the Duck River near Manchester, Tennessee, and building the fortifications now known as the Old Stone Fort.

[One report I read indicated the markers were taken down in 2015.  One can only guess the rationale employed by Professional Killjoys, if in fact the plaques are gone.]

An online brochure for the park contains this explanation:

High atop Fort Mountain are the rocky ruins of an ancient “stone wall” with prehistoric origin steeped in legend. Generations of archaeologists and historians have unsuccessfully sought to unravel the riddle of this wall, one of several stone assemblages scattered throughout the Southeast. More than 150 years after its discovery, answers still evade us as to who built the wall, when and for what purpose.

Theories abound, and one of the more realistic explanations is that the wall was built around 500 A.D. by a tribe of Native Americans for ceremonial or religious purposes. Others assert the wall was built by wandering bands of Welsh explorers during the 14th century as fortification against Indians. Welsh Prince Madoc has been credited with building several stone petroglyphs in the Southeast after supposedly sailing into Alabama.

Another theory, based on Cherokee legend, is that the wall was built by the “Moon Eyes,” a race of light-skinned people who could see in the dark because of their larger or paler eyes. Or perhaps Spanish conquistadors, possibly Hernando de Soto, built the wall as a defense against Indian attacks. Since no artifacts have been found to support these theories, no one knows who built the “wall of stones” zigzagging across the southern face of the Cohutta mountain range’s most prominent peak.

This part of the southern Appalachian Mountains rises above the Piedmont Plain and offers 80-mile views, making it an ideal location for ceremonial practices or defensive needs. The stone wall runs east and west for 855 feet, and its height varies from two to six feet. Archaeologists believe it was much higher before exploration and plunder by previous scientists and treasure hunters. Adding to the mystery are 30 “pits” built into the wall. Were these gun emplacements or symbolic to some ceremonial practice of earlier inhabitants? Will the secrets contained within these stones forever remain a mystery?