Thomas Spottswood Hinde (April 19, 1785 – February 9, 1846) was an American newspaper editor, opponent of slavery, author, historian, real estate investor, Methodist minister and a founder of the city of Mount Carmel, Illinois.  A letter from Hinde appeared in The American Pioneer, A Monthly Periodical, Devoted to the Objects of the Logan Historical Society; Or, to Collecting and Publishing Sketches Relative to the Early Settlement and Successive Improvement of the Country, Volume I, 1842. 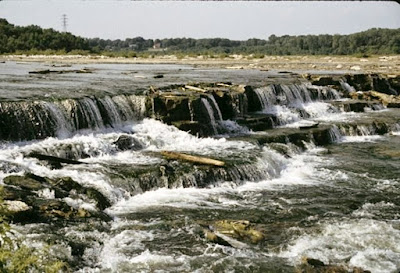 FALLS OF THE OHIO

In the letter, Hinde shares an account of breastplates with "the Welsh coat-of-arms" recovered near the falls of the Ohio, supposed evidence of early travels by Prince Madoc or other Welsh explorers in America.

Dear Sir — Your letter of the 17th, to major Armstrong, was placed in my hands some days ago. The brief remarks and hints given you are correct. I have a vast quantity of western matter, collected in notes gathered from various sources, mostly from persons who knew the facts. These notes reach back to remote periods. It is a fact that the Welsh, under Owen ap Zuinch, in the 12th century, found their way to the Mississippi, and as far up the Ohio as the falls of that river at Louisville, where they were cut off by the Indians; others ascended the Missouri, were either captured, or settled with and sunk into Indian habits.

Proof: In 1799, six soldiers' skeletons were dug up near Jeffersonville; each skeleton had a breast-plate of brass, cast, with the Welsh coat of arms, the mermaid and harp, with a Latin inscription, in substance "virtuous deeds meet their just reward."

One of these plates was left by captain Jonathan Taylor, with the late Mr. Hubbard Taylor, of Clarke county, Kentucky, and when called for by me, in 1814, for the late doctor John P. Campbell, of Chillicothe, Ohio, who was preparing notes of the antiquities of the West, by a letter from Hubbard Taylor, Jr., (a relation of mine,) now living, I was informed that the breast-plate had been taken to Virginia, by a gentleman of that state, I supposed as a matter of curiosity.

Proof 2d: The late William Mcintosh, who first settled near this, and had been for fifty or sixty years prior to his death, in 1831 or 2, a western Indian trader, was in fort Kaskaskia, prior to its being taken by general George Rogers Clarke, in 1778, and heard, as he informed me himself, a Welshman and an Indian from far up the Missouri, speaking and conversing in the Welsh language.

It was stated by Gilbert Imlay, in his History of the West, that it was captain Abraham Choplin, of Union county, Kentucky, that heard this conversation in Welsh. Doctor Campbell visited Choplin, and found it was not him; afterwards the fact was stated by Mcintosh, from whom I obtained other facts as to western matters.

Some hunter, many years ago, informed me of a tomb-stone being found in the southern part of Indiana, with initials of a name, and 1186 engraved on it.

The Mohawk Indians had a tradition among them, respecting the Welsh, and of their having been cut off by the Indians, at the falls of the Ohio. The late colonel Joseph Hamilton Daviess, who had for many years sought for information on this subject, mentions this fact, and of the Welshmen's bones being found buried on Com Island; so that Southey, the king's laureat, had some foundation for his Welsh poem.

As to Logan, the Mingo Indian chief, the facts, as stated by me, were not only obtained from Mr. Jacob W. Davis, of Bartholomew county, Indiana, then residing (1831) near Columbus, but from various other sources, during the last thirty or forty years. I never like to rest any statement of mine on mere report. I sifted every statement to the bottom. 1 had become wearied with hearing contradictory statements; anecdotes related of Wayne's officers or soldiers, I have frequently heard applied to those of the last tear, by young men who knew no better. As to Mr. D., I know not whether he is living.

As to Tecumseh, or Tecumsekeh, the Shawnee chief, in 1821, in Ohio county, Kentucky, I fell in with the reverend Benjamin Kelly, a Baptist preacher, who was taken prisoner, with colonel Daniel Boone, while making salt, at the Blue-licks of Kentucky, in 1779 ; the Indians took them to a salt spring, six or eight miles south east of Chillicothe, (now Ross county,) and set them to work making salt from a secret spring, cut through a rock, and fitted in to hide it with a round flat stone.

The Indians having attacked a fort, in Greenbrier county, Virginia, were defeated; on coming to this spring, the salt makers joined them to go home, (at Oldtown, three miles from Xenia.) Boone, thinking that this defeated army intended attacking Boonsborough, on their way he deserted, somewhere near Washington, in Fayette county, and got to Boonsborough the second day! What a race! nobody can do it now. This fact corrects the history of Kentucky. Kelly was five years in Blackfish's family, with Lal-luze-stee-ka, the prophet, and Tekumtha, (as the Shakers in 1807 wrote their names,) sons of Blackfish.

I published Mr. Kelly's statement, in a Cincinnati paper, in 1824 or 5, and it went the rounds of the papers; also a story of Tecumseh, related to me by captain Thomas Bryan, who fell in with Blackfish and his family, in 1788, while surveying, on Ohio Brushcreek, and saved them (by killing two elks and a bear) from starvation. On this occasion, Blackfish put up a prayer and thanksgiving in his camp, which melted Bryan's men into tenderness and to tears!

Reverend Henry Frost got hold of Dr. John P. Campbell's manuscripts, "Western Antiquities," and published them in Philadelphia. General Samuel Finley arrested the sale of the work, for the doctor's widow. I had furnished Dr. Campbell with the most important facts, but Mr. Frost gave me no credit in his book. Doctor Camp bell died about 1816.

My notes are scattered through eight or ten or more volumes, and as I am about arranging them under the head of " Western Researches," at the request of my friends of the cities, when so arranged I can then draw off for you what may best suit your excellent work, "The Pioneer," which I think does great credit to the West.

But I regret that in this age of improvement, writers delight in hunting up hard dictionary phrases, to express their ideas. The standard of plain language is our president's messages. I knew an editor, somewhere in Ohio, who was thought to be a great man. He had a strange title for his paper, and his sheets of editorial matter were filled with new coined words. I was frequently asked their meaning, and could not tell; even a learned judge of your supreme court asked the meaning of the title to his paper, which I could not at that time explain; but afterwards I found in his office a dictionary of jaw-crackers, of new coined words, Greek, Latin, and phrases not used by English readers,— and the mystery was solved!