A book by Robert Mills, published in 1826, offers some unusually detailed insights on the native people of the Palmetto State.  Following is a passage from Statistics of South Carolina: Including a View of Its Natural, Civil, and Military History, General and Particular:

South Carolina, when first settled by the English, was inhabited by numerous tribes of Indians, whose settlements extended from the ocean to the mountains. As far as we are able to judge, from documents extant in the Secretary of State's Office, and other sources which may be relied on, the number of these different nations, or tribes, exceeded twenty-eight. The Westoes and Savannahs were the two most potent tribes. 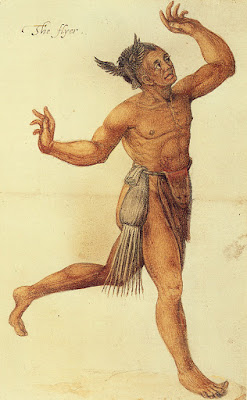 Previous to the settlement of the country by the whites, a dreadful civil war broke out between these two nations, which thinned their numbers considerably: the Westoes, the more cruel of the two, were eventually forced quite out of the province, and the Savannahs continued good friends and useful neighbours to the whites.

This circumstance proved a remarkable providence to the colony. Had the Indians of this country been of a ferocious and jealous character, their numbers would have enabled them to frustrate all attempts of Europe to colonize the country ; but so widely different was their characters from this, that like children of nature (as they were) they received the whites with kindness, gave them as much land as they wanted, and every assistance in supplying them with provisions.

The first settlement of Carolina was founded on principles of benevolence towards these benighted sons of the forest. The charter granted by the king, to the lords proprietors, contained a clause, by which they were bound "to propagate the Gospel among the Indians, and thereby to civilize them. The proprietors instructed their tenants to cultivate the good will of the aborigines. Though these principles constituted the law of the land, yet no serious measures were taken by the proprietors to carry them into effect; and their tenants followed only their own interests, in their intercourse with the Indians.

The bond of union between them was the mutual interchange of such articles as each needed. To the Indian a knife, a hatchet, or a hoe, was a valuable acquisition. To the white man the skins and game of the forest were equally acceptable. The love of ease, was as natural to the one as the other; and the Indian would rather give to the white settler the profits of a year's hunting, than be without his instruments. Having obtained these, in process of time he found the tomahawk and musket equally useful: these he also coveted, and could not rest till he had obtained them. What was at first only convenient, in the course of time became almost necessary; the original bond, therefore, progressively strengthened and confirmed, as the channels of commerce opened.

The Indian found that he was not only treated with friendship and civility, but that the white people were equally fond of his skins, furs, and lands, as he was of their gaudy trinkets and various implements. It was this connection that induced the native inhabitants of the forest peaceably to admit strangers though differing in complexion, language and manners, to reside among them, and to clear and cultivate their lands.

The wants of the Indians grew, from indolence, in a greater degree than they could be gratified; and the destroying vice of drunkenness crept in among them so rapidly, that what with sickness, smallpox, &c. their numbers were gradually reduced, so that they lost their formidable character.

Carolina has (much to its honour) as little Indian blood to answer for, or of injustice to these simple sons of the forest as any other state in the union; she never was the aggressor in any of the wars that took place; but always acted on the defensive, when the poor Indians, instigated by the Spaniards or French, engaged in wars of extermination to the English settlers.

A right to the soil of the country was grounded upon the acknowledged truth of this doctrine, that the earth was made for man; and was intended by the Creator of all things to be improved for the benefit of mankind. The land which could support one savage, in his mode of living, is capable of supporting five hundred, under proper cultivation. These wild lands, therefore, were not the separate property of the few savages who hunted over them, but belonged to the common stock of mankind. The first who possessed a vacant spot, and actually cultivated it for some time, ought to be considered as the proprietor of that spot, and they who derive their titles from him have a valid right to the same.
This doctrine is agreeable to the judicial determination of the Courts of South Carolina with respect to rights in land, derived solely from uninterrupted possession for term, formerly of five now of ten years.

But some of the first settlers of Carolina, not satisfied to rest their right of soil upon the law of nature, and their government, made private purchases from the Indians; and the government itself entered into treaties with the aborigines.