How to Raise a Giant

The native people of North American told dozens, if not hundreds, of stories about giants that once roamed the continent.

One of the first such stories to be shared with European adventurers originated on the Carolina coast.  In 1521, the Spanish explorer Vasquez de Ayllon landed at Winyah Bay near the mouth of the Pee Dee River, a region that the native people called “Chicora.” 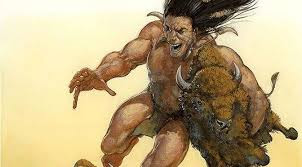 One extraordinary native was converted and baptized as “Francisco de Chicora” and he accompanied Ayllon on a voyage back to Spain, where Ayllon solicited support for the establishment of a Spanish colony in Chicora.  While on that visit to Spain, “Francisco” became a sensation, one of the first native Americans to attain celebrity status in the Old World.

From “A Spanish Settlement in Carolina, 1526,” J. G. Johnson wrote of Francisco:

As a spinner of extraordinary stories history does not record his superior. Considering the credulity of his audience one can understand how the quick-witted but homesick savage perceived a method of ending his forced exile by exciting the curiosity and cupidity of the Spaniards. He recounted that in his country the natives were white, that the kings and queens were giants — elongated in their youth by rubbing their bodies with ointments concocted from strange herbs   — then stretched like wax until they were of enormous height. He also told of a race of men in Chicora with marvellously long tails; that they bored holes through their seats through which the tails dangled when they were seated; that the people of Chicora made cheese from the milk of their women; that deer were kept in enclosures and sent out with shepherds.

In “De Orbe Novo” (1530), Peter Martyr wrote of his encounters with Francisco and Ayllon.  Following is his report on the giant king, Datha, who ruled the Duhare district near Chicorana:

They are governed by a king of gigantic size, called Datha, whose wife is as large as himself. They have five children. In place of horses the king is carried on the shoulders of strong young men, who run with him to the different places he wishes to visit. . . .I now come to a fact which will appear incredible to Your Excellency. You already know that the ruler of this region is a tyrant of gigantic size. How does it happen that only he and his wife have attained this extraordinary size? No one of their subjects has explained this to me, but I have questioned the above mentioned licenciate Ayllon, a serious and responsible man, who had his information from those who had shared with him the cost of the expedition. I likewise questioned the servant Francisco, to whom the neighbours had spoken. Neither nature nor birth has given these princes the advantage of size as an hereditary gift; they have acquired it by artifice.

While they are still in their cradles and in charge of their nurses, experts in the matter are called, who by the application of certain herbs, soften their young bones. During a period of several days they rub the limbs of the child with these herbs, until the bones become as soft as wax. They then rapidly bend them in such wise that the infant is almost killed. Afterwards they feed the nurse on foods of a special virtue. The child is wrapped in warm covers, the nurse gives it her breast and revives it with her milk, thus gifted with strengthening properties. After some days of rest the lamentable task of stretching the bones is begun anew. Such is the explanation given by the servant Francisco Chicorana.

Ayllon secured the royal go-ahead to establish the Chicora colony, the first Spanish colony in the Southeast, but the effort met with misfortune, failure, and, by 1526, Ayllon’s death.  Of Francisco, nothing more is known of his life after he returned to America.