"The Sole Necessity of Earth and Heaven!" 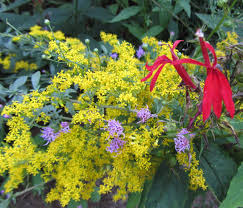 It opens with a scene that one might find in the Carolina mountains at this very time of year. Whittier prefaced the poem with this note:

This poem, when originally published, was dedicated to Annie Fields, wife of the distinguished publisher, James T. Fields, of Boston, in grateful acknowledgment of the strength and inspiration I have found in her friendship and sympathy. The poem in its first form was entitled The Wife: an Idyl of Bearcamp Water, and appeared in The Atlantic Monthly for January, 1868. When I published the volume Among the Hills, in December of the same year, I expanded the Prelude and filled out also the outlines of the story.

That tawny Incas for their gardens wrought,

Heavy with sunshine droops the golden-rod,

And the red pennons of the cardinal-flowers

Hang motionless upon their upright staves.

The sky is hot and hazy, and the wind,

Vying-weary with its long flight from the south,

With faintest motion, as one stirs in dreams,

Confesses it. The locust by the wall

Stabs the noon-silence with his sharp alarm.

A single hay-cart down the dusty road

On the load’s top. Against the neighboring hill,

Huddled along the stone wall’s shady side,

The sheep show white, as if a snowdrift still

Defied the dog-star. Through the open door

A drowsy smell of flowers-gray heliotrope,

To the pervading symphony of peace.

No time is this for hands long over-worn

To task their strength; and (unto Him be praise

Who giveth quietness!) the stress and strain

Of years that did the work of centuries

Have ceased, and we can draw our breath once more

Freely and full. So, as yon harvesters

Make glad their nooning underneath the elms

With tale and riddle and old snatch of song,

I lay aside grave themes, and idly turn

And human life, as quiet, at their feet.

And yet not idly all. A farmer’s son,

Proud of field-lore and harvest craft, and feeling

All their fine possibilities, how rich

And restful even poverty and toil

Become when beauty, harmony, and love

Sit at their humble hearth as angels sat

At evening in the patriarch’s tent, when man

The symbol of a Christian chivalry

Tender and just and generous to her

Who clothes with grace all duty; still, I know

Too well the picture has another side,–

How wearily the grind of toil goes on

Where love is wanting, how the eye and ear

And heart are starved amidst the plenitude

Of nature, and how hard and colorless

Is life without an atmosphere. I look

Across the lapse of half a century,

And call to mind old homesteads, where no flower

Told that the spring had come, but evil weeds,

Nightshade and rough-leaved burdock in the place

Of the sweet doorway greeting of the rose

And honeysuckle, where the house walls seemed

Blistering in sun, without a tree or vine

To cast the tremulous shadow of its leaves

Across the curtainless windows, from whose panes

Fluttered the signal rags of shiftlessness.

Within, the cluttered kitchen-floor, unwashed

(Broom-clean I think they called it); the best room

Stifling with cellar damp, shut from the air

Save the inevitable sampler hung

Over the fireplace, or a mourning piece,

A green-haired woman, peony-cheeked, beneath

Bristling with faded pine-boughs half concealing

The piled-up rubbish at the chimney’s back;

And, in sad keeping with all things about them,

Untidy, loveless, old before their time,

With scarce a human interest save their own

Monotonous round of small economies,

Or the poor scandal of the neighborhood;

Blind to the beauty everywhere revealed,

Treading the May-flowers with regardless feet;

For them the song-sparrow and the bobolink

Sang not, nor winds made music in the leaves;

For them in vain October’s holocaust

Burned, gold and crimson, over all the hills,

The sacramental mystery of the woods.

Church-goers, fearful of the unseen Powers,

Saving, as shrewd economists, their souls

And winter pork with the least possible outlay

Of salt and sanctity; in daily life

Of Christian charity and love and duty,

As if the Sermon on the Mount had been

Rich in broad woodlands and in half-tilled fields,

And yet so pinched and bare and comfortless,

The veriest straggler limping on his rounds,

The sun and air his sole inheritance,

Laughed at a poverty that paid its taxes,

And hugged his rags in self-complacency!

Not such should be the homesteads of a land

Where whoso wisely wills and acts may dwell

As king and lawgiver, in broad-acred state,

His hour of leisure richer than a life

Of fourscore to the barons of old time,

Our yeoman should be equal to his home

A man to match his mountains, not to creep

Dwarfed and abased below them. I would fain

In this light way (of which I needs must own

With the knife-grinder of whom Canning sings,

Invite the eye to see and heart to feel

The beauty and the joy within their reach,–

Home, and home loves, and the beatitudes

Of nature free to all. Haply in years

That wait to take the places of our own,

Heard where some breezy balcony looks down

On happy homes, or where the lake in the moon

Sleeps dreaming of the mountains, fair as Ruth,

In the old Hebrew pastoral, at the feet

Of Boaz, even this simple lay of mine

May seem the burden of a prophecy,

Finding its late fulfilment in a change

Slow as the oak’s growth, lifting manhood up

And reverence, to the level of the hills.

O Golden Age, whose light is of the dawn,

And not of sunset, forward, not behind,

Flood the new heavens and earth, and with thee bring

All the old virtues, whatsoever things

Are pure and honest and of good repute,

But add thereto whatever bard has sung

Or seer has told of when in trance and dream

They saw the Happy Isles of prophecy

Between the right and wrong; but give the heart

The freedom of its fair inheritance;

Let the poor prisoner, cramped and starved so long,

At Nature’s table feast his ear and eye

With joy and wonder; let all harmonies

The princely guest, whether in soft attire

Of leisure clad, or the coarse frock of toil,

And, lending life to the dead form of faith,

Give human nature reverence for the sake

Of One who bore it, making it divine

With the ineffable tenderness of God;

The heirship of an unknown destiny,

The unsolved mystery round about us, make

A man more precious than the gold of Ophir.

Sacred, inviolate, unto whom all things

Should minister, as outward types and signs

Of the eternal beauty which fulfils

The one great purpose of creation, Love,

The sole necessity of Earth and Heaven!
Posted by GULAHIYI at 5:30 AM