The Philosophy of Failure

Socialism is the philosophy of failure, the creed of ignorance, and the gospel of envy. 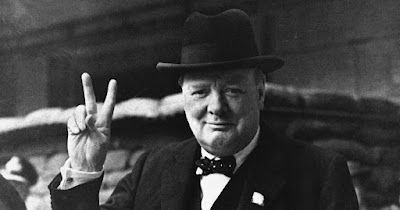 1936...Franklin Delano Roosevelt, who had recently accepted the Democrat nomination leading up to his second term as president, was steering away from conventional interpretations of the Constitution with his New Deal programs. In England, Winston Churchill was compelled to write an article defending America’s founding document. “What Good’s a Constitution?” was published in August 1936:


No one can think clearly or sensibly about the vast and burning topic without in the first instance making up his mind upon the fundamental issue: Does he value the State above the citizen, or the citizen above the State? Does a government exist for the individual, or do individuals exist for the government? One must recognize that the world today is deeply divided upon this....

All nations agree that in time of war, where the life and independence of the country are at stake, every man and woman must be ready to work and, if need be, die in defense of these supreme objects; and that the government must be empowered to call upon them to any extent. But what we are now considering is the existence of this principle in times of peace and its erection into a permanent system to which the life of great communities must be made to conform. The argument is used that economic crises are only another form of war, and as they are always with us, or can always be alleged to be with us, it is claimed that we must live our lives in a perpetual state of war, only without actual shooting, bayoneting, and cannonading. This is, of course, the Socialist view....

Once the rulers of a country can create a war atmosphere in time of peace, can allege that the State is in danger and appeal to all the noblest national instincts, as well as its basest, it is only in very solidly established countries that the rights of the citizens can be preserved....

Churchill elaborated on the damages inflicted on freedom when socialist policies were imposed on the people of Germany and Russia.


In the United States, also, economic crisis has led to an extension of the activities of the Executive and to the pillorying, by irresponsible agitators, of certain groups and sections of the population as enemies of the rest. There have been efforts to exalt the power of the central government and to limit the rights of individuals. It has been sought to mobilize behind this reversal of the American tradition at once the selfishness of the pensioners, or the would-be pensioners of Washington, and the patriotism of all who wish to see their country prosperous once more.

It is when passions and cupidities are thus unleashed and, at the same time, the sense of public duty rides high in the hearts of all men and women of good will that the handcuffs can be slipped upon the citizens and they can be brought into subjugation to the executive government. Then they are led to believe that, if they will only yield themselves, body, mind, and soul, to the State, and obey unquestioningly its injunctions, some dazzling future of riches and power will open to them....

I take the opposite view. I hold that governments are meant to be, and must remain, the servants of the citizens; that states and federations only come into existence and can only be justified by preserving the 'life, liberty, and pursuit of happiness' in the homes and families of individuals. The true right and power rest in the individual. He gives of his right and power to the State, expecting and requiring thereby in return to receive certain advantages and guarantees....

One of the greatest reasons for avoiding war is that it is destructive to liberty. But we must not be led into adopting for ourselves the evils of war in time of peace upon any pretext whatever....

Civilization means that officials and authorities, whether uniformed or not, whether armed or not, are made to realize that they are servants and not masters. Socialism or overweening State life, whether in peace or war, is only sharing miseries and not blessings. Every self-respecting citizen in every country must be on his guard lest the rulers demand of him in time of peace sacrifices only tolerable in a period of war for national self-preservation. 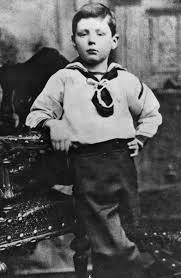 A very young Winston Churchill
Decades earlier, Churchill had confronted socialism. These excerpts are from a speech he delivered at Kinnaird Hall, Dundee in May 1908, while seeking election to Parliament:

To the revolutionary Socialist I do not appeal as the Liberal candidate for Dundee. I recognise that they are perfectly right in voting against me and voting against the Liberals, because Liberalism is not Socialism, and never will be. [Cheers.]

There is a great gulf fixed. It is not only a gulf of method, it is a gulf of principle. There are many steps we have to take which our Socialist opponents or friends, whichever they like to call themselves, will have to take with us; but there are immense differences of principle and of political philosophy between the views we put forward and the views they put forward.

These are the great distinctions which I draw, and which, I think, you will think I am right in drawing at this election between our philosophies and our ideals. Don’t think that Liberalism is a faith that is played out; that it is a philosophy to which there is no expanding future. As long as the world rolls round Liberalism will have its part to play – a grand, beneficent, and ameliorating part to play – in relation to men and States. [Cheers.]

Ah, gentlemen, I don’t want to embark on bitter or harsh controversy, but I think the exalted ideal of the Socialists – a universal brotherhood, owning all things in common – is not always supported by the evidence of their practice. [Laughter.] They put before us a creed of universal self-sacrifice. They preach it in the language of spite and envy, of hatred, and all uncharitableness. [Cheers.]

They tell us that we should dwell together in unity and comradeship. They are themselves split into twenty obscure factions, who hate and abuse each other more than they hate and abuse us. [Hear, hear, and laughter.]

Although I have tried my very best to understand these propositions, I have never been able to imagine the mechanical heart in the Socialist world which is to replace the ordinary human heart that palpitates in our breasts. What motive is to induce the men, not for a day, or an hour, or a year, but for all their lives, to make a supreme sacrifice of their individuality?

What motive is to induce the Scotsmen who spread all over the world and make their way by various paths to eminence and power in every land and climate to make the great and supreme sacrifice of their individuality? I have heard of loyalty to a Sovereign. We have heard of love of country. Ah, but it is to be a great cosmopolitan, republic. We have heard of love of family and wives and children. These are the mere weaknesses of the bad era in which we live.

We have heard of faith in a world beyond this when all its transitory pleasures and perils shall have passed away, a hope that carries serene consolation to the heart of men. Ah, but they deny its existence. [Laughter.] And what then are we to make this sacrifice for? It is for the sake of society.

And what is society? I will tell you what society is. Translated into concrete terms, Socialistic “society” is a set of disagreeable individuals who obtained a majority for their caucus at some recent election, and whose officials in consequence would look on humanity through innumerable grills and pigeon-holes and across innumerable counters, and say to them, “Tickets, please.” [Laughter.] Truly this grey old world has never seen so grim a joke. [Applause.]

We have many good things in common. You have the police, the army, the navy, and officials – why, a President of the Board of Trade you have in common. [Applause.] But we don’t eat in common; we eat individually. [Laughter.] And we don’t ask the ladies to marry us in common. [Laughter.]

And you will find the truth lies in these matters, as it always lies in difficult matters, midway between extreme formulae. It is in the nice adjustment of the respective ideas of collectivism and individualism that the problem of the world and the solution of that problem lie in the years to come. [Applause.]

But I have no hesitation in saying that I am on the side of those who think that a greater collective element should be introduced into the State and municipalities. I should like to see the State undertaking new functions, particularly stepping forward into those spheres of activity which are governed by an element of monopoly. [Applause.]

Your tramways and so on; your great public works, which are of a monopolistic and privileged character there I see a wide field for State enterprise to embark upon. But when we are told to exalt and admire a philosophy which destroys individualism and seeks to replace it by collectivism, I say that is a monstrous and imbecile conception which can find no real foothold in the brains and hearts – and the hearts are as trustworthy as the brains – in the hearts of sensible people. [Loud cheers.]
Posted by GULAHIYI at 8:36 PM