What Does It Mean?

A century ago, the world was struggling with a devastating pandemic. 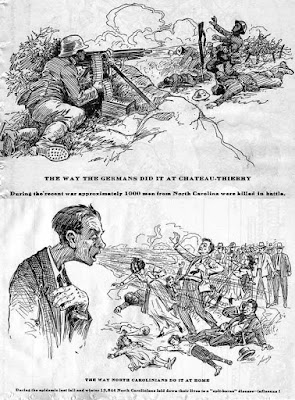 Visit any old cemetery in Western North Carolina, examine the death dates on the gravestones, and you will recognize the impact of “Spanish Flu” which claimed more American lives than the World War just winding down.

October 1918 had some parallels to March 2020, as the influenza dominated the pages of newspapers.  A Baptist minister in North Carolina shared his perspective on the disease that was sweeping the planet:

WHAT DOES IT MEAN? To the Editor of The Gazette:

May it not be that the present epidemic sweeping over the country and taking such a large toll of human  lives in the training camps and from the civilian population has been sent upon us to teach us our dependence upon God and to humble us before Him.  It has often been the case in the history of God's dealings with His people, that some scourge or calamity of some kind had to be sent to bring the people to a realization of their dependence upon a higher power.

Instances of this could be multiplied from the Bible and secular history, and such calamities have always come for the two-fold purpose of rebuking the sin of the people and causing them to turn to God in humble dependence.

Europe had forgotten God;  America was losing sight of Him. The devotees bowing before the goddess of pleasure and the Mammon of this world were Increasing rapidly. The war was sent as a rebuke to the sin or the world. We are Just beginning to feel it in this country, though England, France, and Germany, as well as other countries, have lost the very flower of their young manhood.
Then the epidemic of Influenza came.  It swept over Europe and is now raging in this country.

What does it mean?  It is easy enough to say that it is due to the violation of certain physical laws.

And the atheist will claim that God has nothing to do with it at all.   But many of us can see that God is again rebuking us for our sins, and telling us that we should bow before Him.  Are we going to do it or shall we go on in our sin until this scourge has done its worst?

We do not know what will be sent next.  But undoubtedly something will come, unless the people turn to the Lord.  The prophet Amos tells us how God visited one calamity after another upon the people of Israel, each more severe than the preceding one.

There was "famine, failure of water supply, blasting and mildew," the sword, and last of all they were to meet God In the judgment. The people everywhere should bow before God in confession of sin, and call on Him for pardon. America should be on her face.

We should pray, and continue to pray until we feel the burden of the world's sin and suffering. And then the light from our Heavenly Father's face will break through the clouds and drive away the mists.