A Page From My Misspent Youth

While I was digging around trying to uncover the roots of political correctness, that "real world" quote came to mind.  In the fall of 1972, during my first semester in Chapel Hill, those lines from Nyle Frank went viral, repeated time and again throughout the campus, and much to the mirth of all. 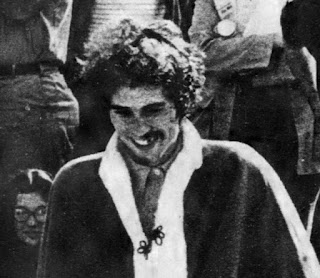 Nyle Frank, aka King Nyle I, founder of the Invisible University, October 1972

I also happened to recollect that one Nyle Frank was the source of the slogan.  Nyle Frank was something of a character during my days in Chapel Hill. I have a vague memory of a coronation, after which he was known as King Nyle I.  Somehow, I managed to track down Frank’s newspaper column that featured the “real world” quote, but more on that in a moment.

A flood (actually a trickle) of other university memories from that time have come to mind.

-         - Going to the midnight showing of 2001: Space Odyssey and falling asleep while the monkeys were still on the beach. I woke up during the closing credits

-        -  Producing keypunch cards, stacking them up for a computer program that would count from one to ten, submitting the decks of cards for processing and waiting to get the printouts on huge sheets of green and white paper

-         - Going to Carmichael Auditorium for concert by a young guy named Jackson Browne, who had a cold.  He was booed when he refused to perform his one and only hit, “Doctor My Eyes” because the song needed drums and his only accompaniment was David Lindley on guitar

-        -  Climbing the creaky wooden stairway at the Intimate Bookshop

Such was the life of a scholar in 1972.  I would not argue that it was worth the price of admission.

Back to Nyle Frank, though.  His catchy phrase appeared at the end of one of his columns in the campus newspaper.  Frank was sharing stories about his days at UCLA, starting in 1963, and sharing some observations about radicalism and higher education:

If one wishes, however, to close with a quote which more closely epitomizes the prevalent philosophy of “higher” education, few could surpass the one (delivered in broken English) by Mr. Chang, my teaching assistant in Economics on how to get the most out of Econ1B: “Now I tell you how pass Docta Allan’s cose.  Get hold of last year’s test, cause I gawantee you 80 per cent be on THIS year’s test.  Now you say to me: “How this prepare me for real world?” But I say to YOU: “Who GIVE shit about real world.”

Yep. We got a lot of mileage from that story back in October 1972.  It was a hoot.  But ten days after the story was published, a letter appeared in the Daily Tar Heel from none other than Dr. William R. Allen himself, and he was not amused.  By the way, I have no recollection of the subsequent letter. (Appearing on the same page of that October 27, 1972 DTH was the article “Quotations from Ayn Rand,” and a letter to the editor lamenting the news that Nyle Frank would be leaving Chapel Hill.)

Allen’s rejoinder opened with that closing paragraph from King Nyle’s original article, and the professor went on to say:

As a crude dialect joke, this might amuse the Archie Bunkers. But presumably it was not intended as a joke – those who boast too much of concern with the “real world” are notoriously very serious.  Evidently, the non-joke was aimed at me. It is not the first time I have been libeled in campus papers.  And it is not likely to be the last time, while the orangutan element is liberally represented on college campuses.

But really, if you start out to do a hatcher job, do it with some flair: at the least, spell my name right.  You might even try to use quotation marks properly.

Incidentally, in reviewing my records of nineteen years at UCLA, I find only one student with the name of Chang.  The student was a female, who took Econ 2 in Winter 1970 with me (the course has not been designated 1B since Spring 1967), and was not an Economics major.  This raises the possibility that the faculty member (?) who wrote your essay is a liar as well as a sloppy researcher, a coward, and a vulgarian.