Almost five years after passage of the Indian Removal Act, the federal government continued to negotiate for a peaceful agreement with the Cherokees regarding their relocation to the West.  Congressman David ("Davy") Crockett continued to spar with has fellow Tennessean President Andrew Jackson. 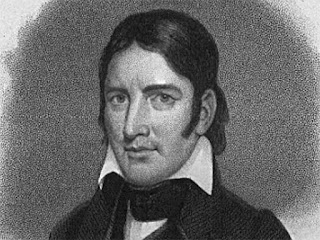 In a threat that sounds familiar these day, Crockett vowed to leave the United States and move to Texas, should Jackson ally Martin Van Buren win the presidency in 1836.  Crockett did not wait that long, and did not live to see Van Buren assume office.  After losing a reelection battle in 1835, Crockett left Tennessee on November 1, bound for Texas.  And four month after that, Crockett died defending the Alamo.

On December 25, 1834, Crockett let off some steam in a letter to a friend, Charles Shultz:

I wrote you a Short time ago, and as I have a leasure moment I will write again although I can ad but little. Times is still no report yet from the Committee of either house upon the French war recommendation. I expect when that report comes in to see the home strings brake the western & Southern men dare not to Sustain Jackson in his mad Carear, and when they refuse all the Blood hounds in the nation will be let loos on them.

The time has Come that man is expected to be transfarable and as negotiable as a promisary note of hand, in those days of Glory and – Jackson & reform & co.– little Vann Sets in his chair and looks as Sly as a red fox, and I have no doubt but that he thinks Andrew Jackson has full power to transfer the people of these united States at his will, and I am truly afread that a majority of the free citizens of these united States will Submit to it and Say amen Jackson done it. It is right If we Judge by the past we can make no other Calculations.

I have almost given up the Ship as lost. I have gone So far as to declare that if he martin vanburen is elected that I will leave the united States for I never will live under his kingdom. before I will Submit to his Government I will go to the wildes of Texas. I will consider that government a Paridice to what this will be.

In fact at this time our Republican Government has dwindled almost into insignificancy our boasted land of liberty have almost Bowed to the yoke of  Bondage. Our happy days of Republican principles are near at an end when a few is to transfer the many. This is Vanburen principles, there is more Slaves in New York and Pennsylvania then there is in Virginia and South Carolina, and they are the meanest kind of Slaves they are – Volunteer Slaves [industrial workers].

Our Southern Slaves is of Some use to the owner. They will make Support for their masters, and those others is of no other use than to make mischief. I must Close in a hope of Seeing better times.

I am with great respects your friend & obt Servt.