THE INDIAN WARD OF GEN. JACKSON

Among those who found a home at the historic Hermitage during the life of its heroic owner, the most notable was Lyncoya, the son of a Creek chief, picked up a baby on one of Jackson’s battlefield against the Southern Indians.  Practically all of his life was spent there, and but for the change in administrations, the Indian boy would have gone thence to the Military Academy at West Point, to be instructed as a soldier. 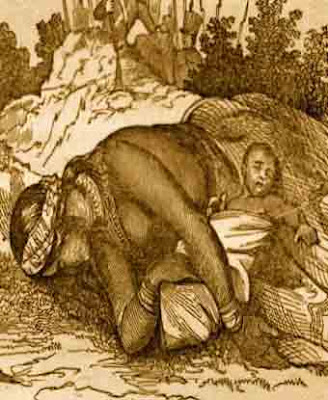 On November 3, 1813, after the battle of Tallushatches was gained by “Old Hickory’s” troops, an Indian child was found by a soldier on the field sucking at the breast of its dead mother.  The child was taken to Jackson, who offered a reward to any of the captive squaws who would care for it.  All refused, saying that the child’s mother and father were dead, it had better be killed also.

The army at the time was in a destitute condition, and all that could be given the waif was a small quantity of brown sugar, biscuit crumbs and water.  By this means the General and his servant Charles kept the Indian baby alive until it could be sent to Huntsville, Ala., where it was cared for by Col. Leroy Pope.  His daughter, Maria, gave the child its name, and he remained with the Pope family till the end of the Creek War, when, Jackson returning home, resumed charge of the boy and carried him to the Hermitage.

In time Lyncoya became healthy and strong, thanks to the care he received at the hands of Mrs. Jackson.  As a child, though, his race tendencies were early manifested in a desire to dress his head with all the feathers he could find about the barnyard of the Hermitage.  At five years he made himself a bow and was fairly proficient with it on the Jackson poultry.  At the age of eight he was sent to a neighboring school, but he was slow to learn during his first two years’ attendance.  After that time, however, his faculties seemed to awaken and he progressed rapidly, so rapidly that the General conceived the idea of making him a trained soldier.  This subject was discussed with President Monroe, who heartily approved it.  Before the lad’s education had sufficiently advanced for that, however, John Quincy Adams and Henry Clay held the reigns of government, and from them Jackson’s household could expect little.

Gen. Jackson decided to allow the boy to indulge a mechanical turn, and in 1827 he was apprenticed to a Nashville saddler.  During the following winter a cold settled on his lungs, and he was finally given a leave of absence to go home.  Mrs. Jackson did everything possible to prolong his life, but it was without avail.  He died at the Hermitage June I, 1828, aged sixteen.